Today, few people can imagine a wardrobe without it pants of one kind or another. A pair of jeans, pants for sports or 'jogging' pants for relaxation, shorts, pajama pants…

Even if you go mostly in dresses, you will probably have one of those mentioned somewhere in the closet. It was funny enough too where it started; with sports, pajamas and work trousers, but to begin with… 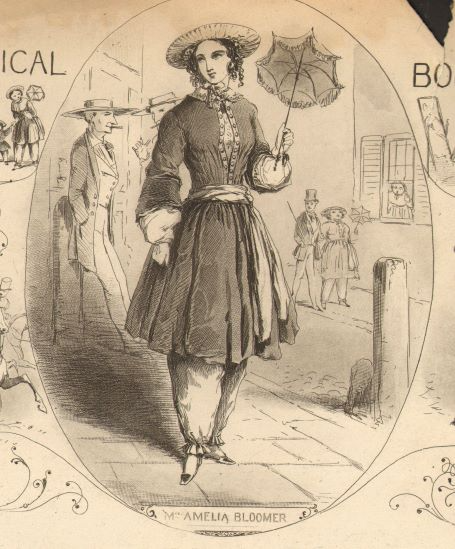 In Western culture, women first began to wear in earnest pants in the 20th century. It was even forbidden for women by law to wear trousers in many countries, i.a. United States and France.

Unlike in the West, working women in ancient Greece and China are believed to have worn trousers and in India it was normal for working women to wear trousers also in the 1800s.

In the 1850s, the women's rights activist Amelia Bloomer started wearing the so-called Bloomers, it was the loose trousers that sat close to the ankles known from the Middle East and Asia, close to the style of the 1990s so-called 'harem trousers' (probably not a word we would use today ) She was the first woman to own and run a newspaper herself, and the desire to go in pants must be seen against the background of the many layers, and impossible corsets and pads that women were expected to wear at the time. It was impractical for freedom of movement and could be unbearably hot and harmful to health. The women of the second women's cause of the 1800th century began to wear loose trousers, aptly calling them 'freedom-dresses'.

Trousers for sports and Haute Couture

In the late 1800s, sports began to become popular, also for women. Cycling was the big craze, along with tennis, swimming and horseback riding, and it was cycling that made more women start wearing the loose pants.

However, it was the famous fashion designer Paul Poiret who made trousers for Haute Couture by being the first to launch pants for women in 1911, still in the so-called 'harem style'. Today, Paul Poiret is best known among fashion aficionados, but he was a landmark first-mover in many areas, including he was also the first designer to make perfumes for his fashion house. They were called Parfums de Rosine, named after the daughter and exist to this day.

Coco Chanel mixed quickly and first created pants to ride in, her 'garconne' style was like made for pants. 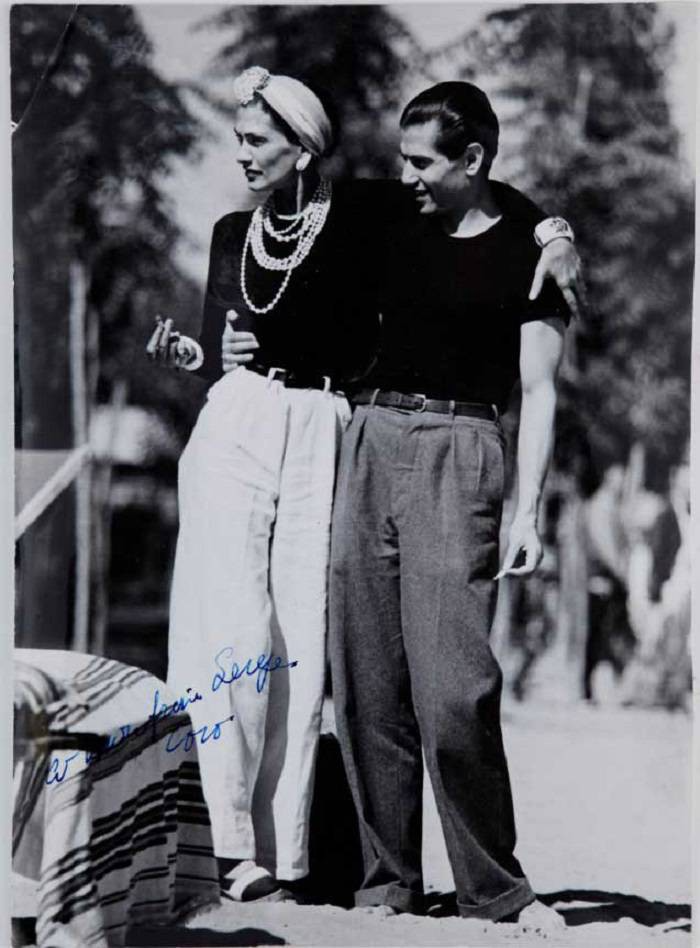 During the First World War, women began to work in factories and the dirty work together with the security element by operating machines made the women here start wearing work trousers.

In the 1920s after World War I, Europe was run-down and Europe's nobles and rich, no longer had money as before, which among other things meant that French designers began to orient themselves towards America. In America, alcohol was banned from 1, and the richer Americans therefore flocked to Europe, i.a. the French Riviera, where one could party and drink.

It was in the late twenties / early 30s that the famous 'beach pajamas', or beach pants, a pair of pants with lots of width became popular. They were young, modern and daring, and among these women, the pants therefore became a big hit. 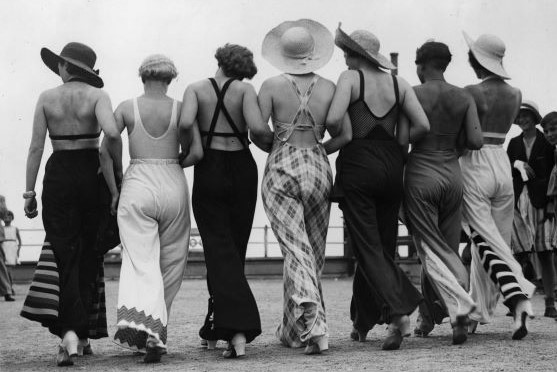 It was also in the years after the First World War that sportswear became more modern, also for women. For example, it was also the more feminine aviators such as Amelia Earheart who showed up in public in trousers, and she even created a brand with casual wear for women.

In the 1930s, trousers were still a peculiar phenomenon, although famous women adopted the trousers; among the most famous Marlene Dietrich, Greta Garbo and Katherine Hepburn, but also Eleanor Roosevelt, who in 1933 became the first 'First Lady' to wear trousers on an official occasion.

It was also in the 30s (1934) that Levi's made the first pair of jeans for women. These were work trousers for women as workers on ranches. 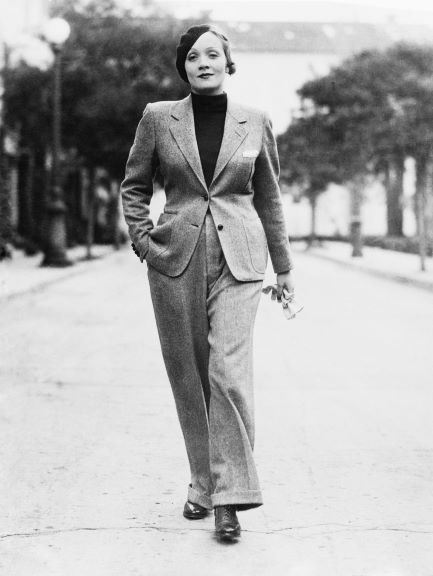 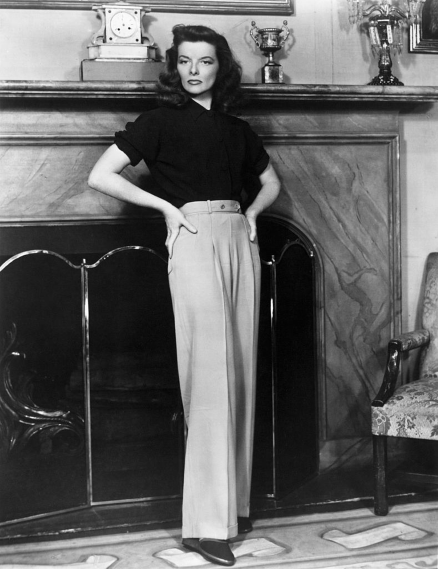 'Sailor' inspired pants from The House Of Foxy

These iconic 'sailor' style trousers have been in our range for many years. They are high-waisted and have wide legs like our other trousers, but the very special thing about this style is the six buttons at the front.

They are most often a regular part of the wardrobe of the 'pinup girl', the 'rockabilly girl' and other vintage fans as they are a very typical 'vintage statement'.

The trousers have a leg length of 81 cm and a girth / leg width of 63 cm. As the only ones of the trousers we mention here, they have no curls, but are in turn a bit longer than the others. 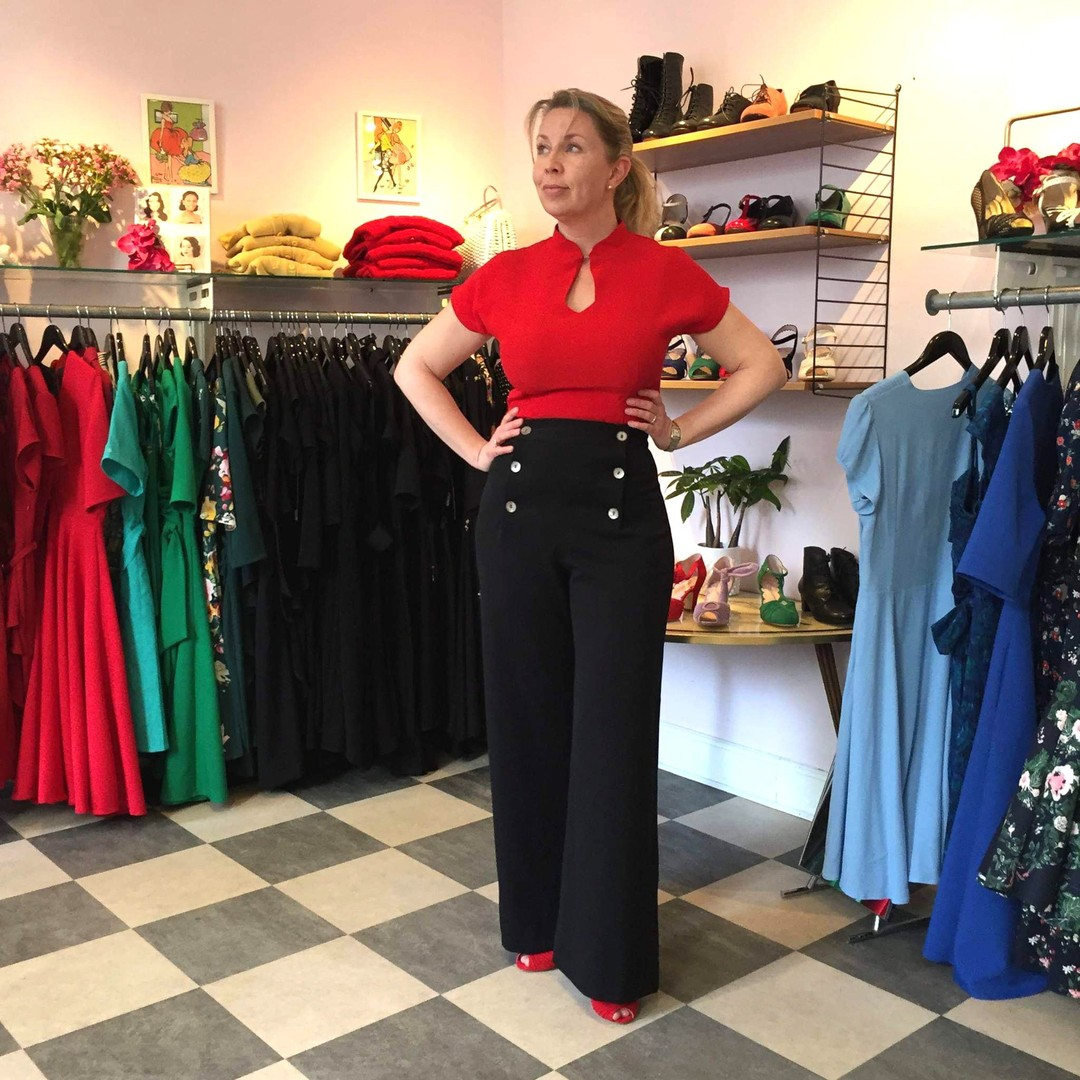 Vintage style Marlene pants from The House Of Foxy

These pants are the epitome of vintage cool. They are inspired by Marlene Dietrich's iconic 30s look and daring play with masculinity. The high-waisted trousers sit beautifully up to the waist, which can be further highlighted by wearing a thin belt through the straps of the trousers. These pants are the only ones with belt loops.

The trouser legs have lots of width which falls straight down and gives them the classic vintage look, with a flattering silhouette. The trousers are closed with a zipper and a button at the front. There are also hidden pockets on the sides.

They have a length of 78 cm and a curvature that can be laid down for the tall girls (approx. 177 cm +). The leg width / circumference of the trouser leg is 53 cm. The material differs further by being in a Cashmere wool blend, which also makes this model slightly more expensive than the others.

Swing pants from The House of Foxy

The beautiful swing trousers from The House of Foxy, like our other trousers, have wide legs and a high waist. They are inspired by the fashion of the 30s / 40s, and close at the side, with 4 beautiful white buttons which give the trousers a beautiful detail.

These trousers are a classic in Mondo Kaos and is available in addition to the classic black also in beige, navy blue and red.

They have a length of 78 cm and a curvature that can be laid down for the tall girls (approx. 177 cm +). Leg width / circumference of the trouser leg is 55 cm. 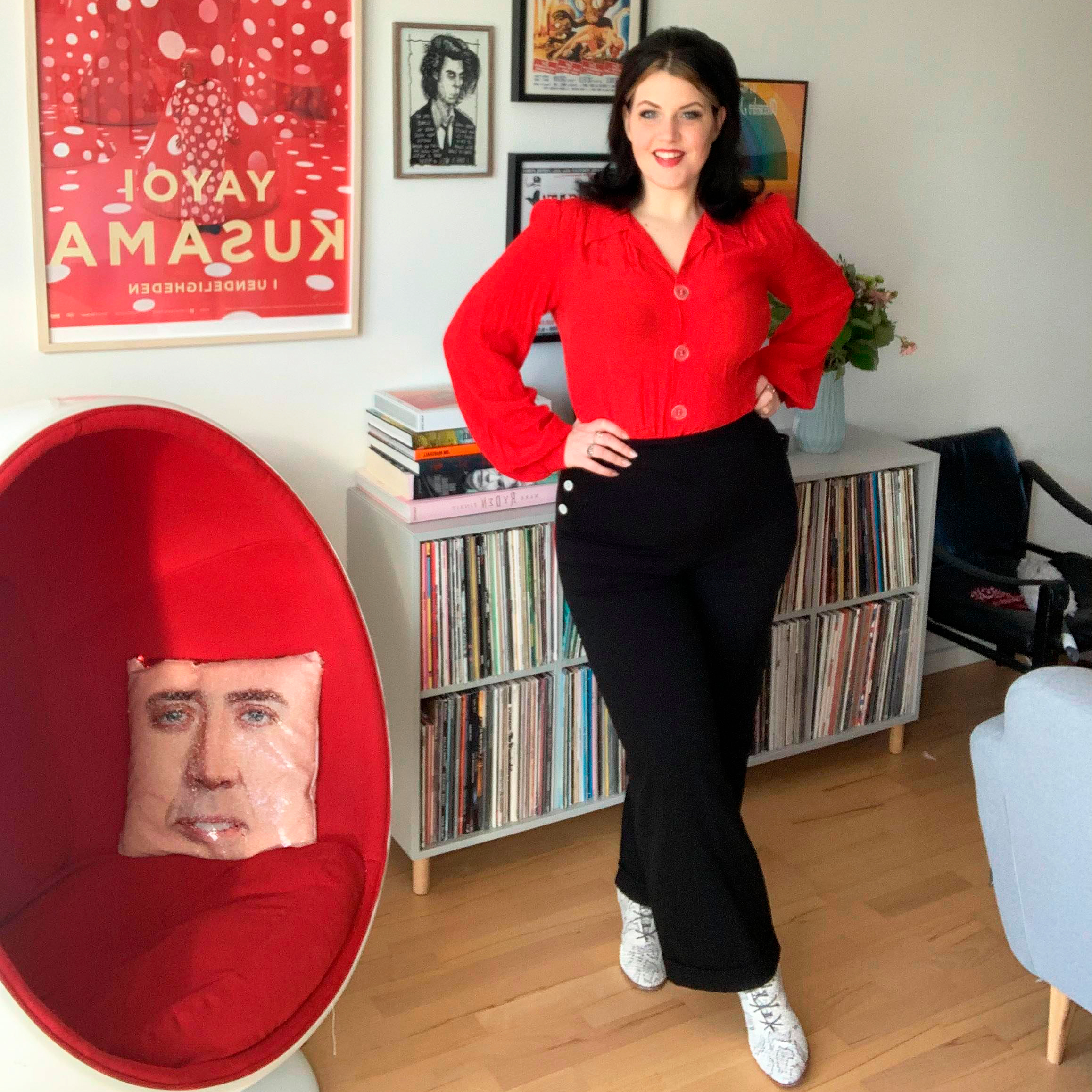 Hepburn pants from The House of Foxy

Another 1940s inspired trousers made after a real 1940s vintage pattern tailored to the figure of the modern woman.

The pants are inspired by the iconic Hollywood star Katherine Hepburn who was one of the 'pants front women' in the 1940s.

They have pockets on the sides, close with a zipper on the side and a single button at the top of the waistband, and then they have nice bright contrast stitching.

The trousers have a length of 78 cm and a curl that can be laid down for the tall girls (approx. 177 cm +). Leg width / circumference of the trouser leg is 55 cm. The material in these pants is a bit heavier than our aforementioned sailor & swing pants. 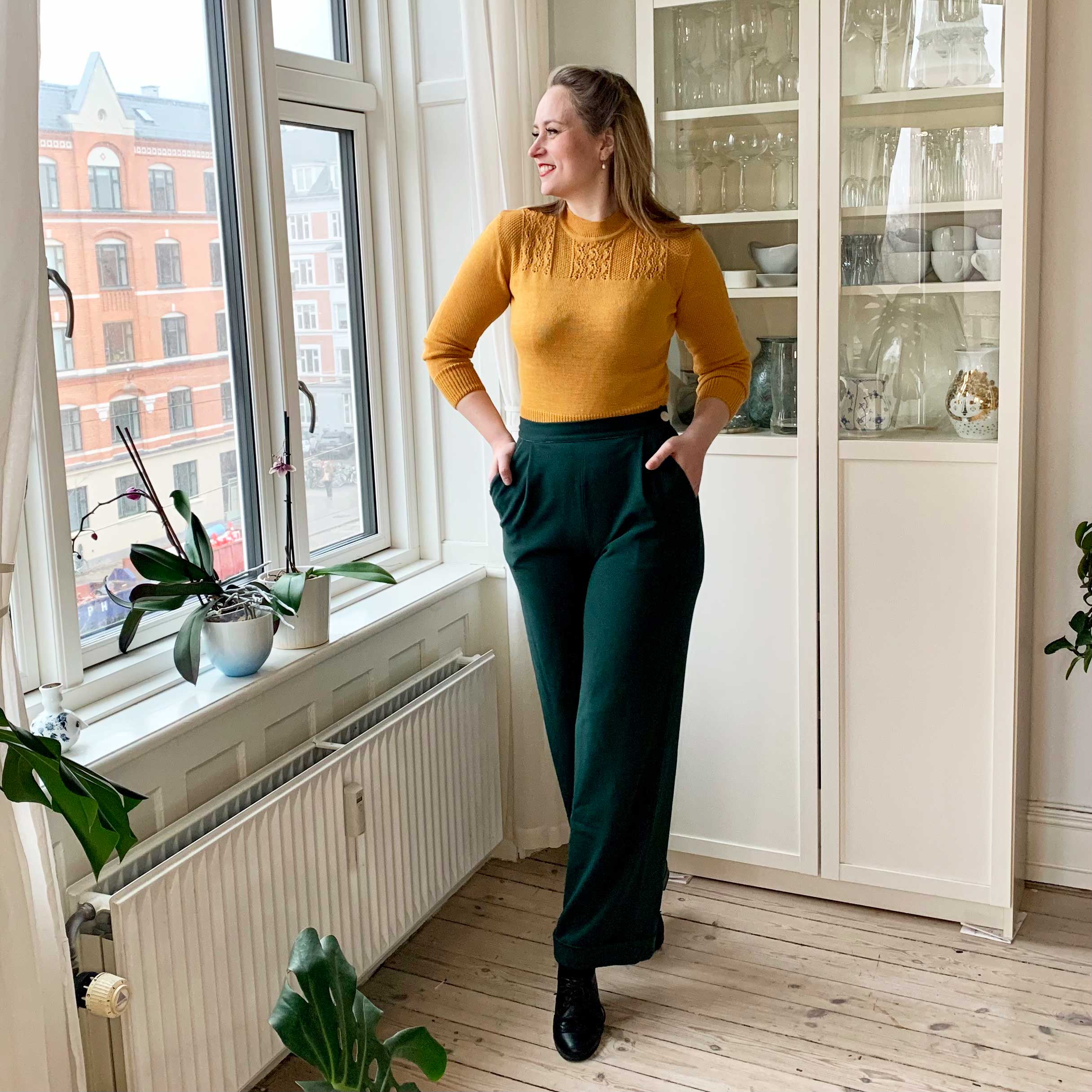 Our beautiful wide pants in vintage style from The House Of Foxy. 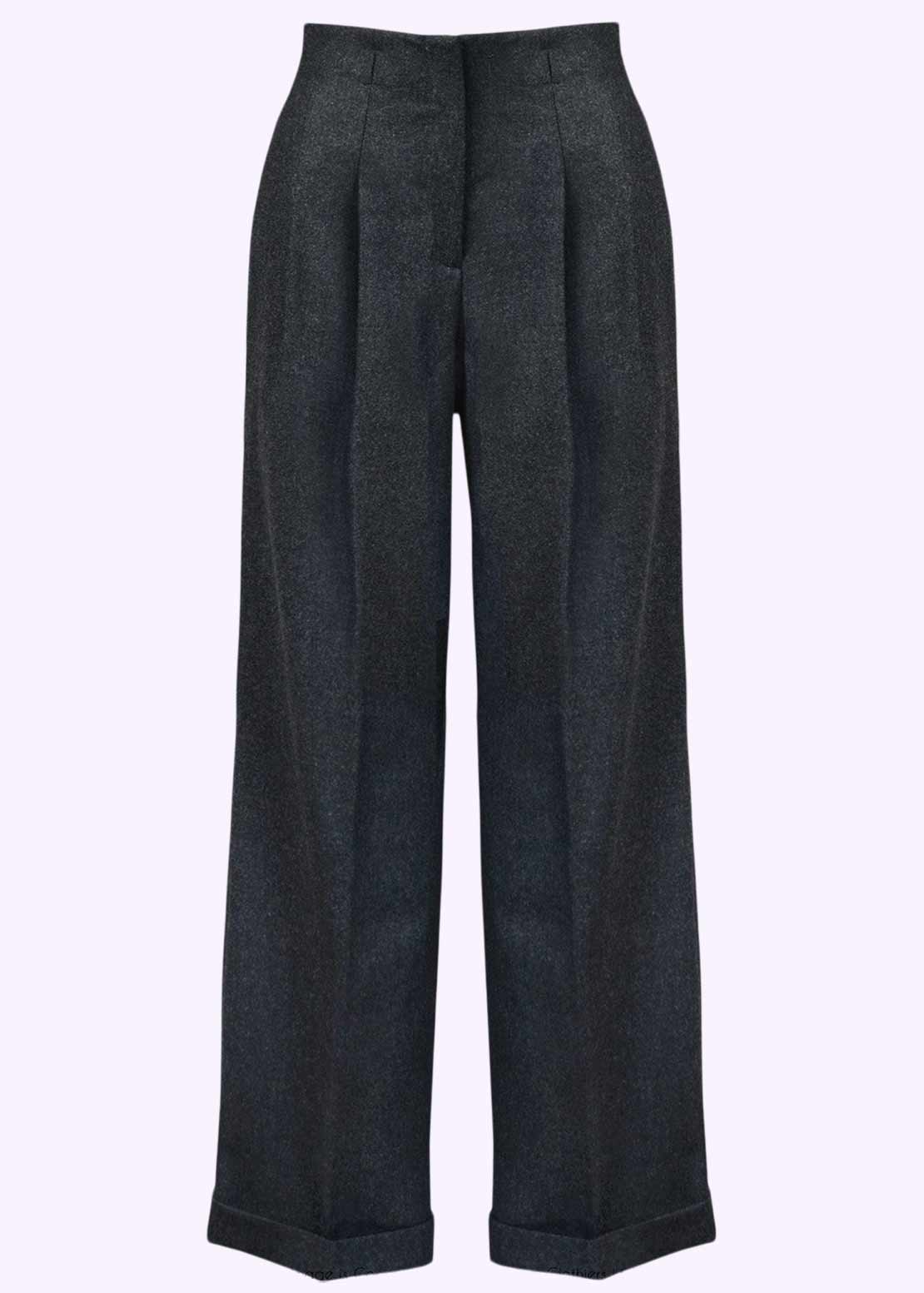 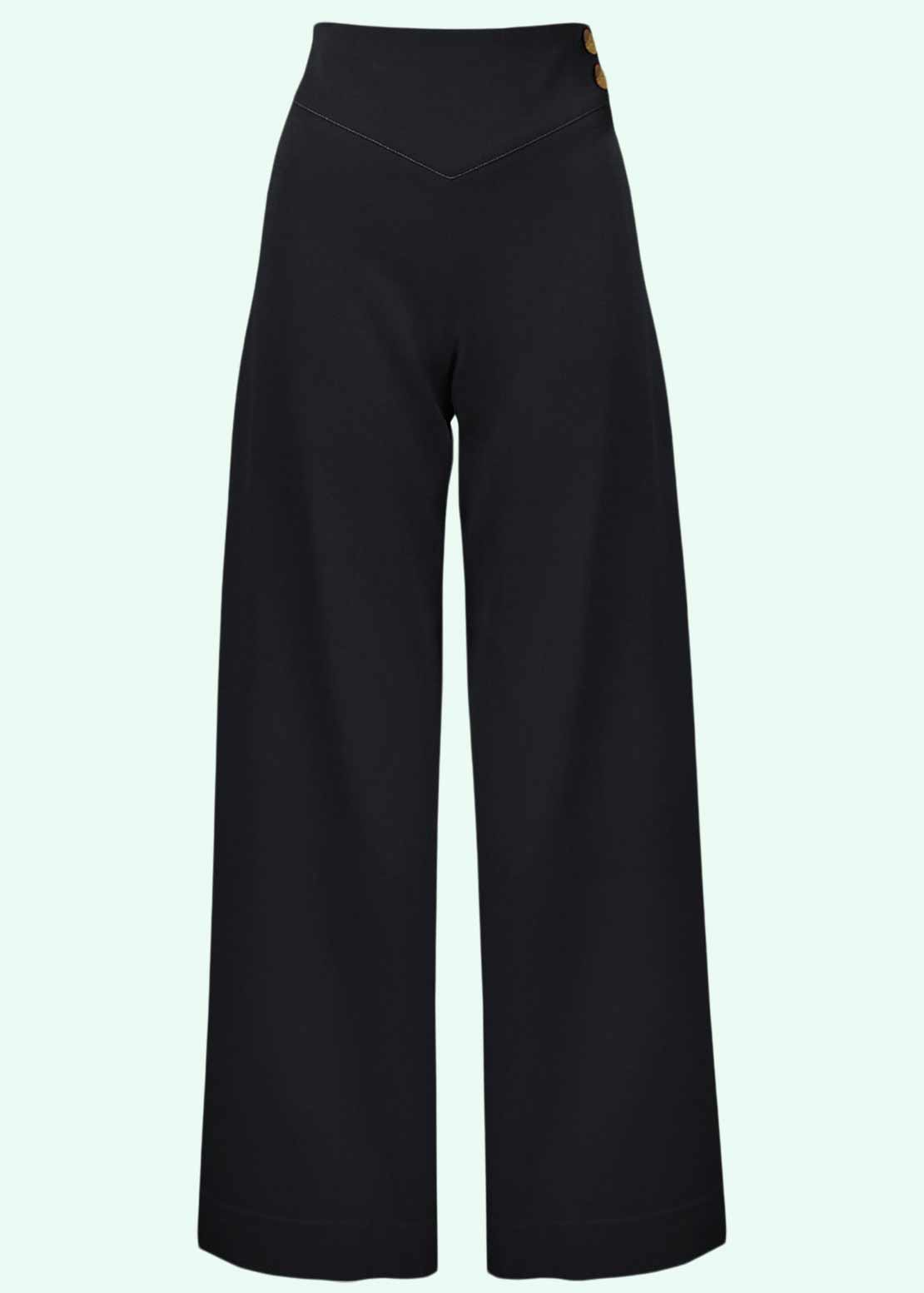 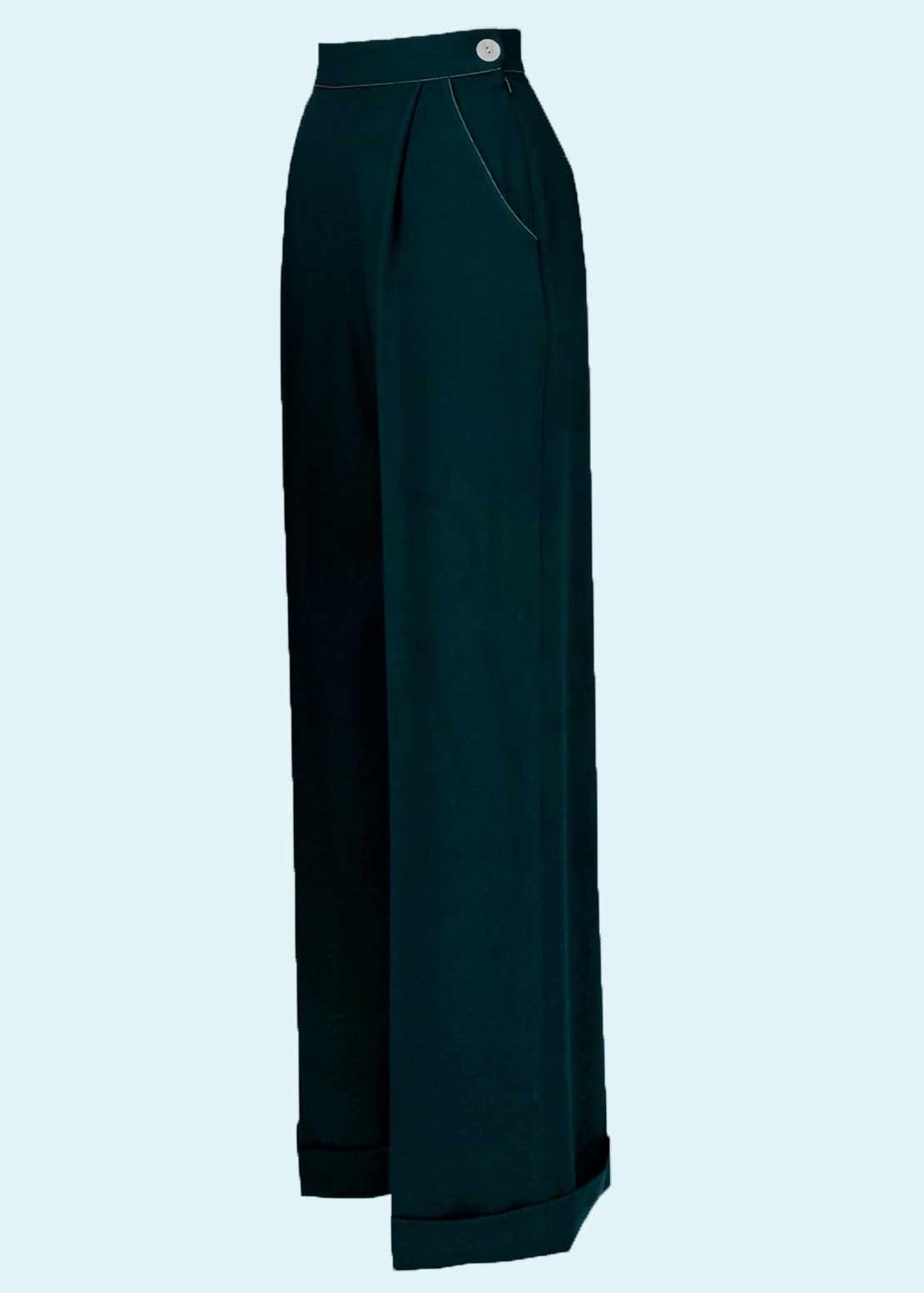 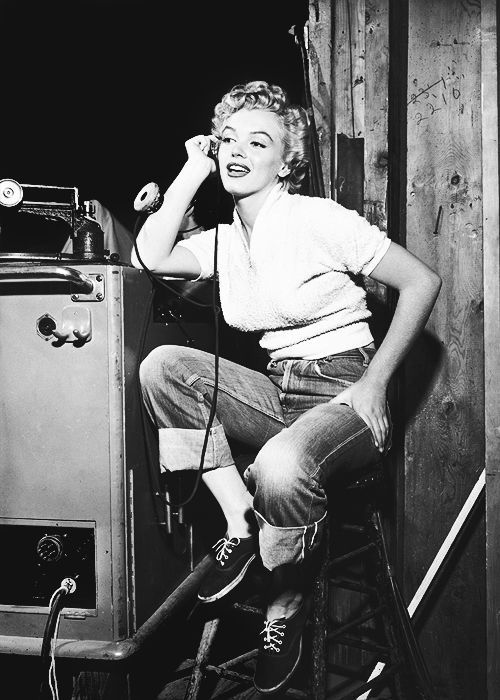 World War II meant that women in 1940s had to work i.a. at factories, as ambulance drivers and as an active part of the war effort, and in general by taking over many of the men's jobs. Just like during World War I, it meant more practical and safe clothing: pants and trouser suits, as well as shorter hairstyle.

It was also here that jeans gained ground. It was durable workwear.

In the post-war period, the focus was on women being 'women' again, ie wearing fine and feminine dresses. This was not least Dior's New Look's fault when he put the swing dress and a few seasons later the bespoke pencil dress / wiggle dress on the agenda.

But the pants had come to stay: slacks for the 'nice' and jeans - especially among rebellious young people.

In the 1950s, jeans for teenagers became popular culture thanks to actors like James Dean in 'Wild Blood' (Rebel without a Cause) and Marilyn Monroe in "The Misfits".

Also, icons such as Marlon Brando and Elvis Presley, who himself grew up on a farm, made theirs a symbol of youth rebellion. 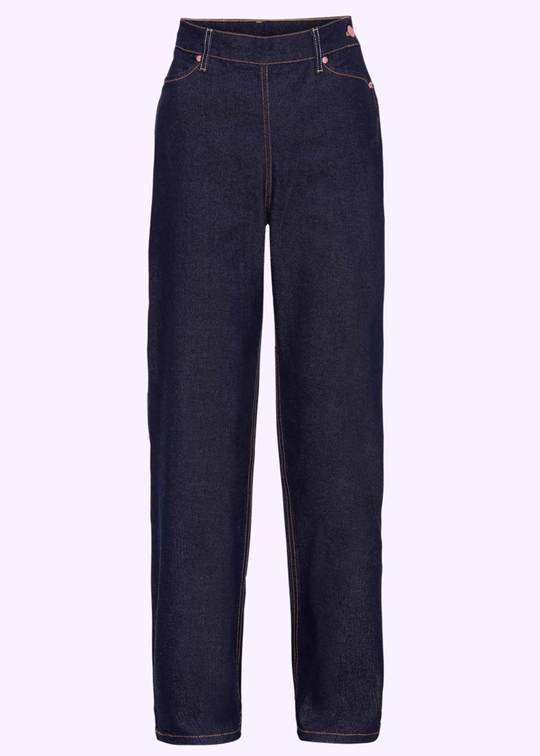 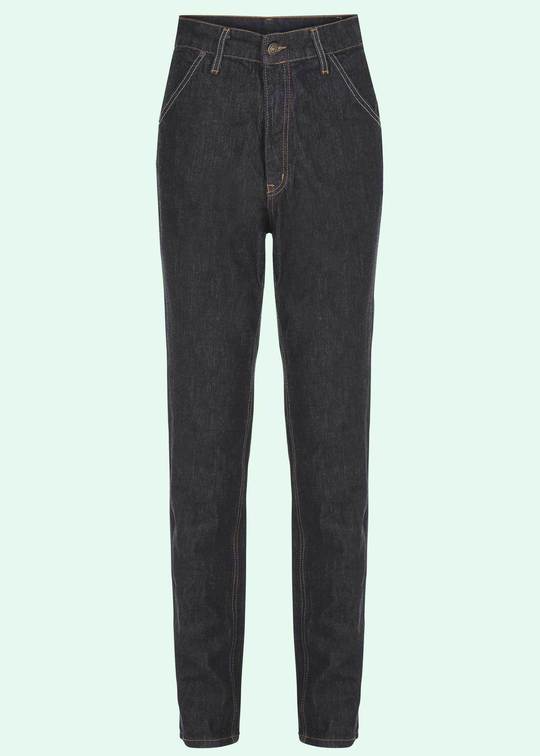 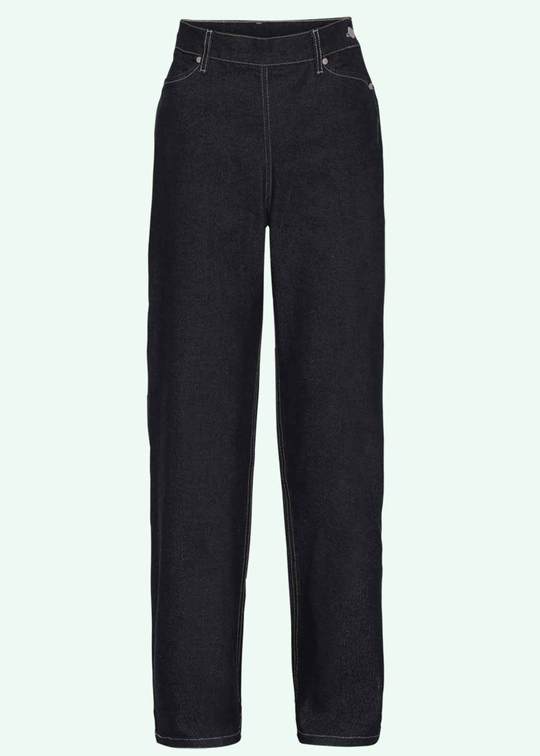 Although pants up through 1950s og 1960s remained the exception in the women's wardrobe, it had to change again with the help of a French designer. It was in 1966 that Yves Saint Laurent presented Le Smoking, a tuxedo for women, and again seriously focused on trousers for women. Catherine Deneuve, Liza Minnelli, Lauren Bacall and Bianca Jagger became avid supporters of the new style.

From the end of 1960s it had finally become more normal for women to wear trousers, also in their regular wardrobe. 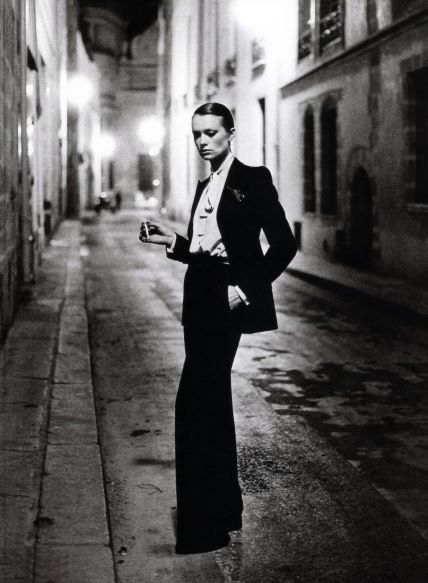 SEE ALL OUR TROUSERS HERE

We love the new styles, and hope to have given you plenty of inspiration to jump in pants. 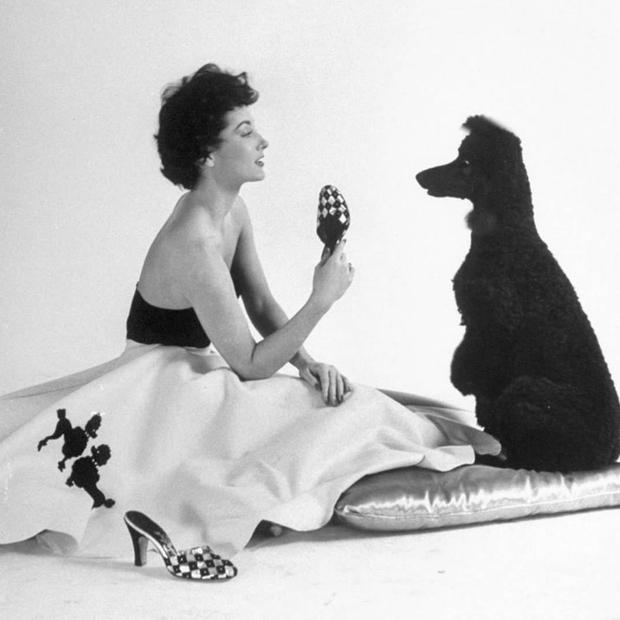 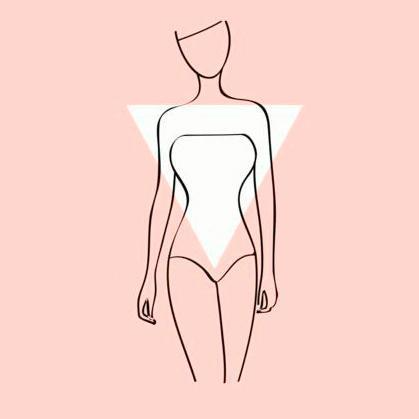 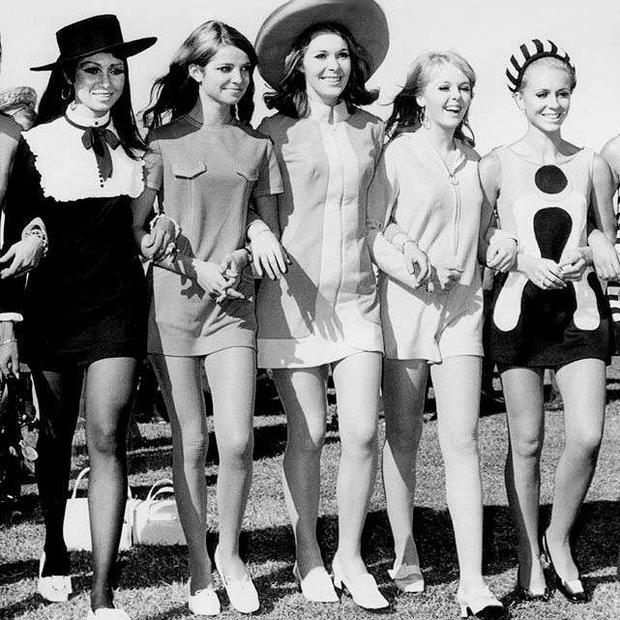