Something the modern and retro wardrobe has 100% in common is jeans! Today, it is unthinkable to walk the streets and not come across anyone wearing jeans - they have become a basic in the fashion scene. It is a neutral lower part that we can use for all occasions, by styling the upper part up or down. But that has far from always been the case.

Denim (jeans) originated in the USA where Levi Strauss in the 1870s began the production of denim workwear, in the form of trousers with the well-known double stitching and copper studs for extra durability.

It was at that time intended as clothing for the hard and arduous work of the mines, and for cowboys on the American ranches. It is difficult to imagine other clothes from the 1870s that we could easily wear today, without standing out significantly from the crowd. Imagine crinolines, corsets (for men and women) and floor-length workers' dresses in linen.

Although jeans were 'invented' back in the 1870s, it was not until 1934 that women got their first pair of jeans. These were still working clothes, made for the hard work of the American 'ranches'. Levi Strauss had seen that hard-working women borrowed their husbands 'and brothers' jeans, and understood that the time had come to design jeans specifically with women in mind. Therefore, Lady Levi's model 701 was born.

It was still a shocking thing to see woman in pants, especially even jeans with a button closure at the front. Although Vogue actually had an article on jeans and casual wear in the 1930s, it was not until the 1940s, during World War II, that jeans for women became popular, and more standardized as workwear in factories. We may be thinking of "Rosie the Riveter", and the factory workers who produced for the war effort were also called "Rosies". When we see pictures from factories such as manufactured ammunition, planes, tanks and ships, these women most often wear jeans and denim trouser suits. 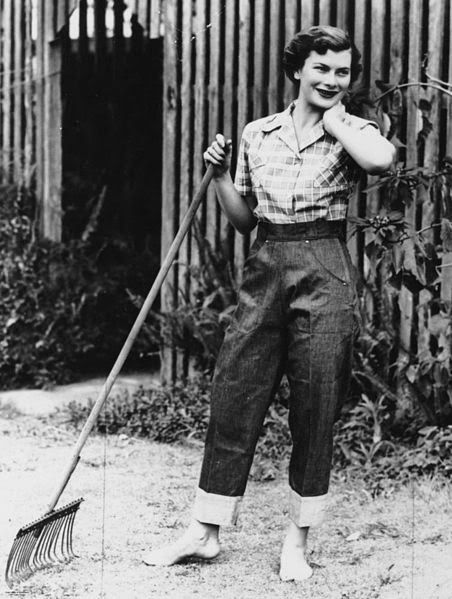 Jeans from Freddies of Pinewood

English Phil & Jo who both have a penchant for jeans from 1940er - 1950s merged both privately and commercially, and in 1999 founded Freddies of Pinewood.

Jeanies Jeans is a real 50s model in 100% cotton, ie without stretch. In return with the most beautiful fit, softness and durability. This model is high-waisted with slim legs, large front pockets and perfect for snooping. They close at the side.

Grease Monkey the trouser suit from Freddies Of Pinewood is designed based on an authentic cut pattern from 1943, and has all the details you associate with a trouser suit from that time, while at the same time it seems timeless due to the beautiful feminine fit.

Soo ZQ the model is the more slack-like model, in 50s style with zipper on the side, and slim legs. Again, the fabric is 100% soft cotton, thus giving the desired true vintage feel. These jeans are perfect for shirts such as those from The Seamstress of Bloomsbury.

In the 1950s, jeans for teenage became popular culture thanks to actors like James Dean i "Wild Blood" (Rebel without a Cause) and Marilyn Monroe and "The Misfits." In fact, Wild Blood should have been a black and white film, but when it was decided to turn the film into colors, the blue Lee jeans were colored even more blue, so that they became even more conspicuous as the symbol of his rebellion. But also other icons such as Marlon Brando og Elvis Presley, who himself grew up on a farm, made theirs become a symbol of youth rebellion. 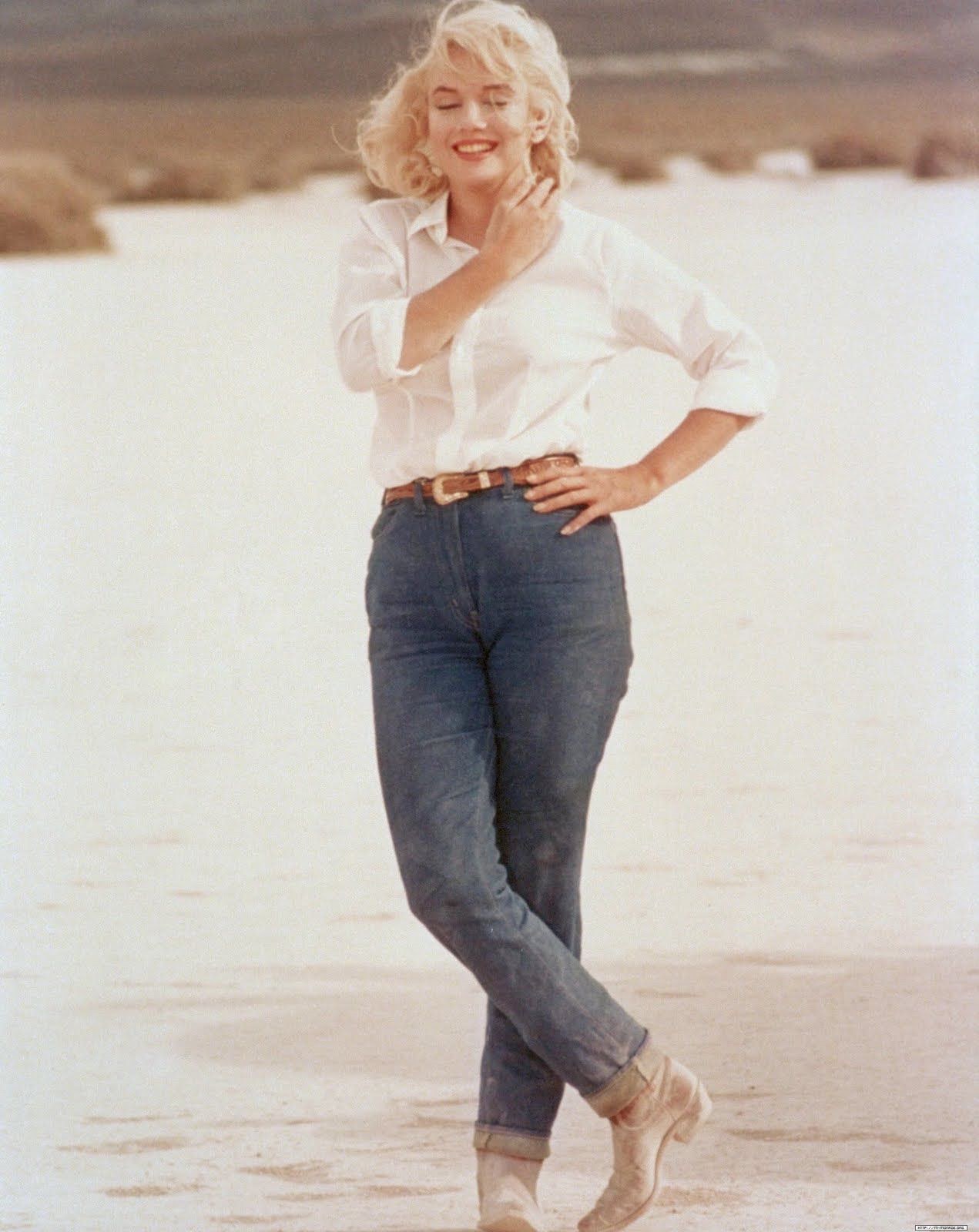 Jeans on the Catwalk

While jeans from before 60s should fit the individual in style and shape, a high content of stretch obviously has the advantage that it fits pretty much everyone regardless of body type. The fabric of many modern jeans has become thinner and has lost its durable character, what originally made them so popular and unique.

In the 1970s, jeans came into the fashion scene, and in 1976, for the first time in fashion history, Calvin Klein designed jeans for the catwalk. It was not until the 1980s that stretch in denim really took off, and it was not until the 1990s that this became standard use with slim fit cuts, which as we approached the 00s and the beginning of the new millennium, had to last a long time. below the waist.

The 1990s was the decade when most fashion houses, Dolce et Gabbana, Versace, Dior etc got their own jeans brand. Stretch is what stylistically distinguishes past jeans from today's. 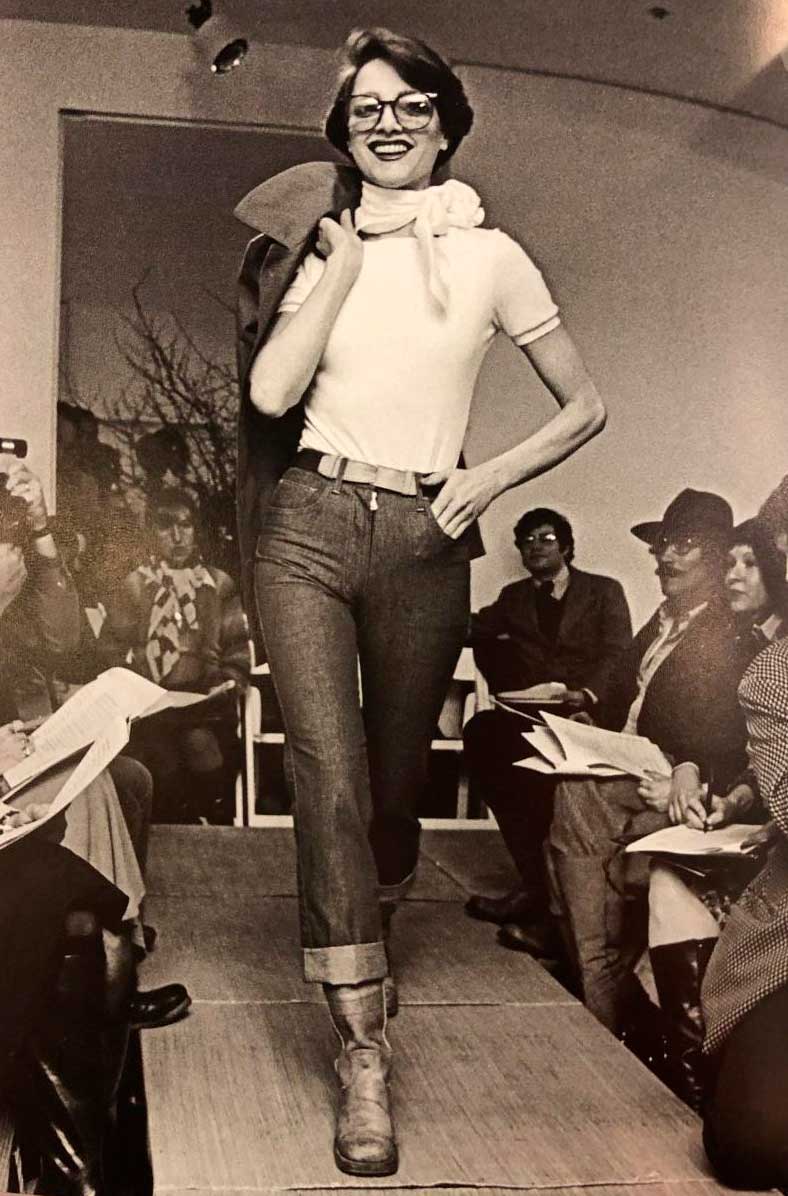 Jeans were banned in theaters, restaurants, schools and other public institutions, which only further strengthened their image as being for 'the wild youth'. In the 1960s, the youth and rock culture took jeans further, and jeans emerged as a garment throughout the Western world.

Lady K Loves makes their jeans in the durable denim, but adds a bit of stretch for a comfortable modern fit - the best of both worlds! The brand is based on 1950s Rock 'N' Roll and in addition, Lady K Loves works towards being a sustainable and socially responsible brand. At their Indian factories, only women work. They use sustainable dyes and locally produced cotton. They also work in the local community to ensure that they have a healthy staff and take care of the environment. The jeans fabric is imported to England, where men and women complete the jeans. 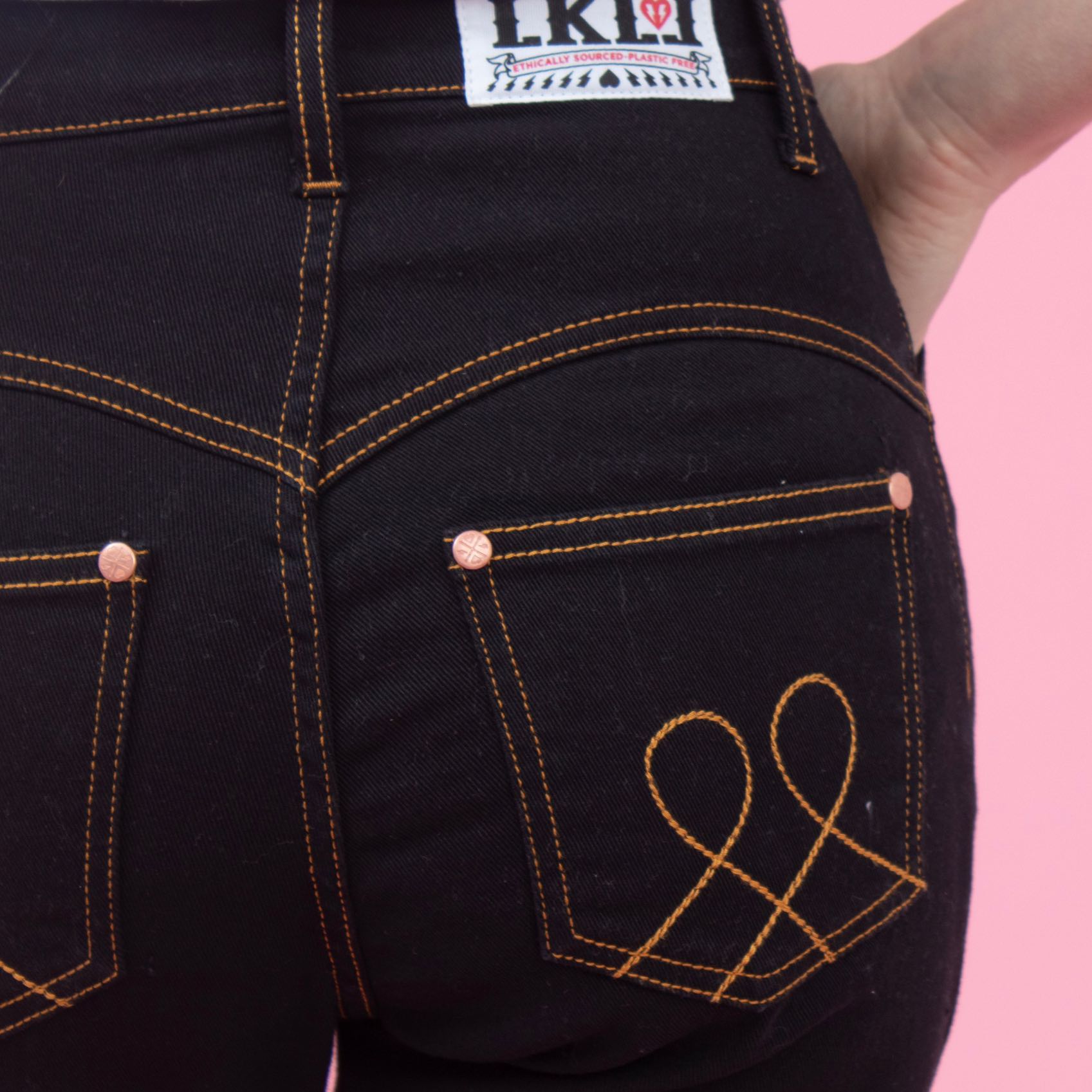 We carry the models Classic, Polly and Le Wild.

Le Wild the model is a real 50s western denim. It has a high waist with slightly wide straight legs, and then it closes in the best vintage manner on the side. Le Wild is a classic boot cut, which has room for boots inside, and is really the perfect vintage jeans. It has a bit of stretch for modern comfort. Together with the Frida boots from Miss L Fire, you really create a beautiful retro-inspired look.

Classic the model is Lady K Love's classic model with a high waist and slim legs that fit in size ratio hip and waist, based on measurements from their customers from Lady K Love's Facebook page. This pair of jeans fits more, and is ideal for dressing up at the bottom for the perfect pin-up 50s look. This style is especially lovely along with ours Mondo Kaos T-shirt or our shirts with "Pussy Bow" e.g. Estelle from Heart Of Haute. You can also venture out into the real 50s greaser look, by tying the shirt on the belly for example. our shirts from Very Cherry is suitable for this.

Polly the model is the same as Classic, but is designed for the more petit woman, ie. that it has lower "rise" as well as leg length.

We hope that you as a reader became a little wiser about the story behind, as well as our range of Jeans. If you have further questions, we are happy to answer them if you write to shop@mondokaos.dk. 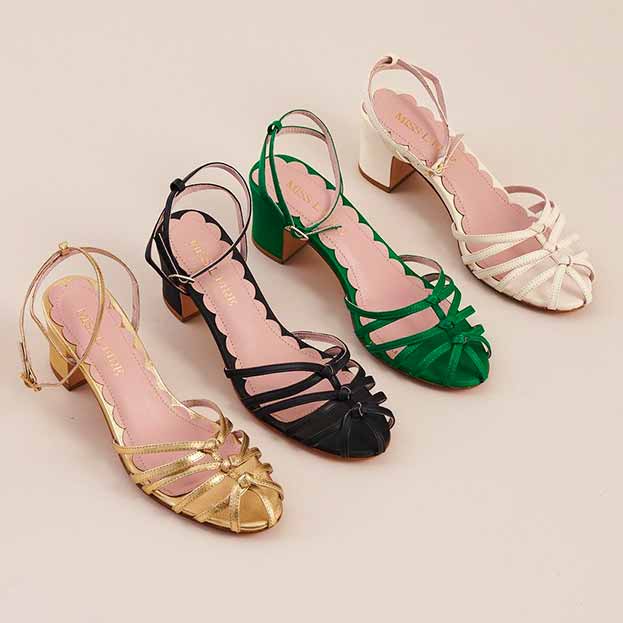 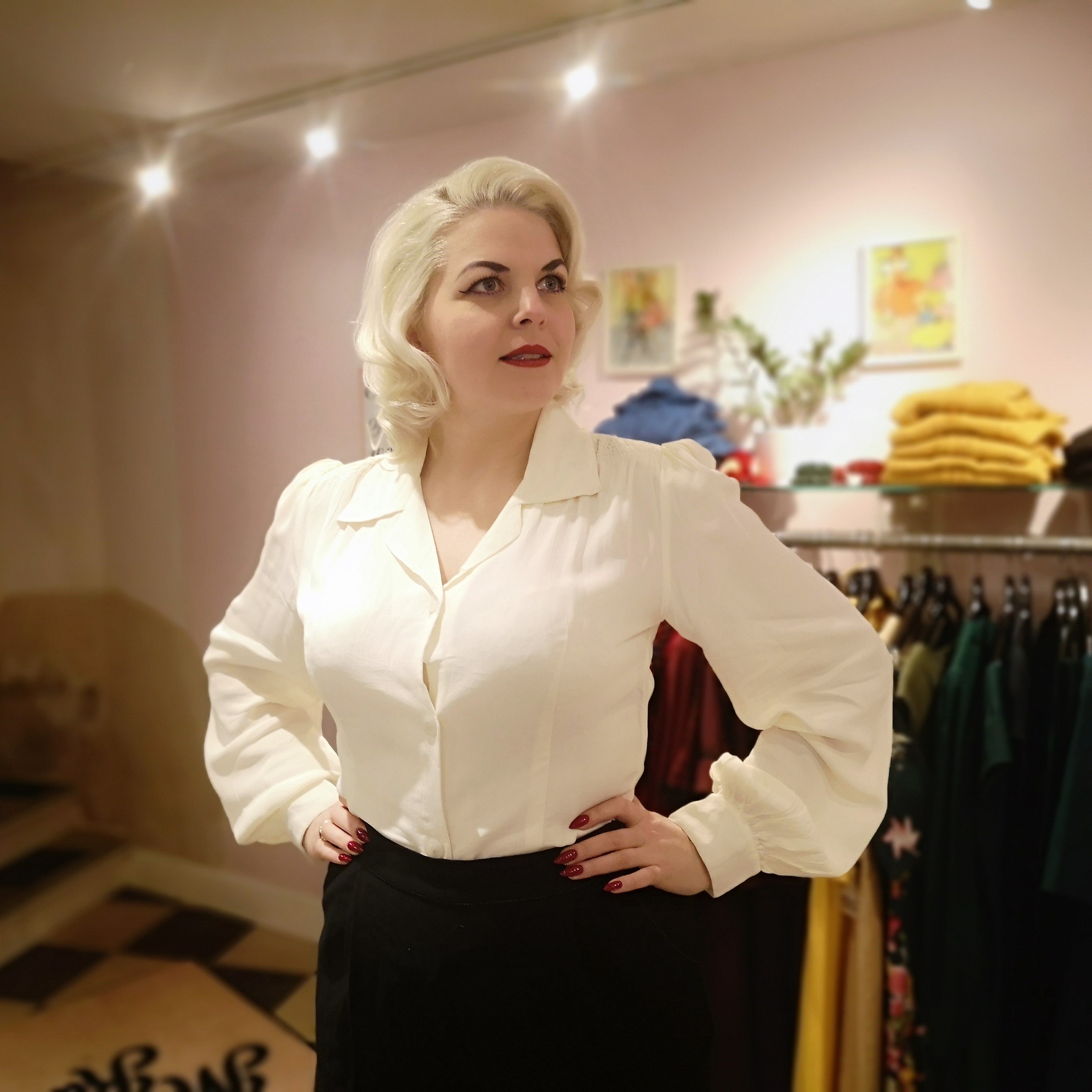 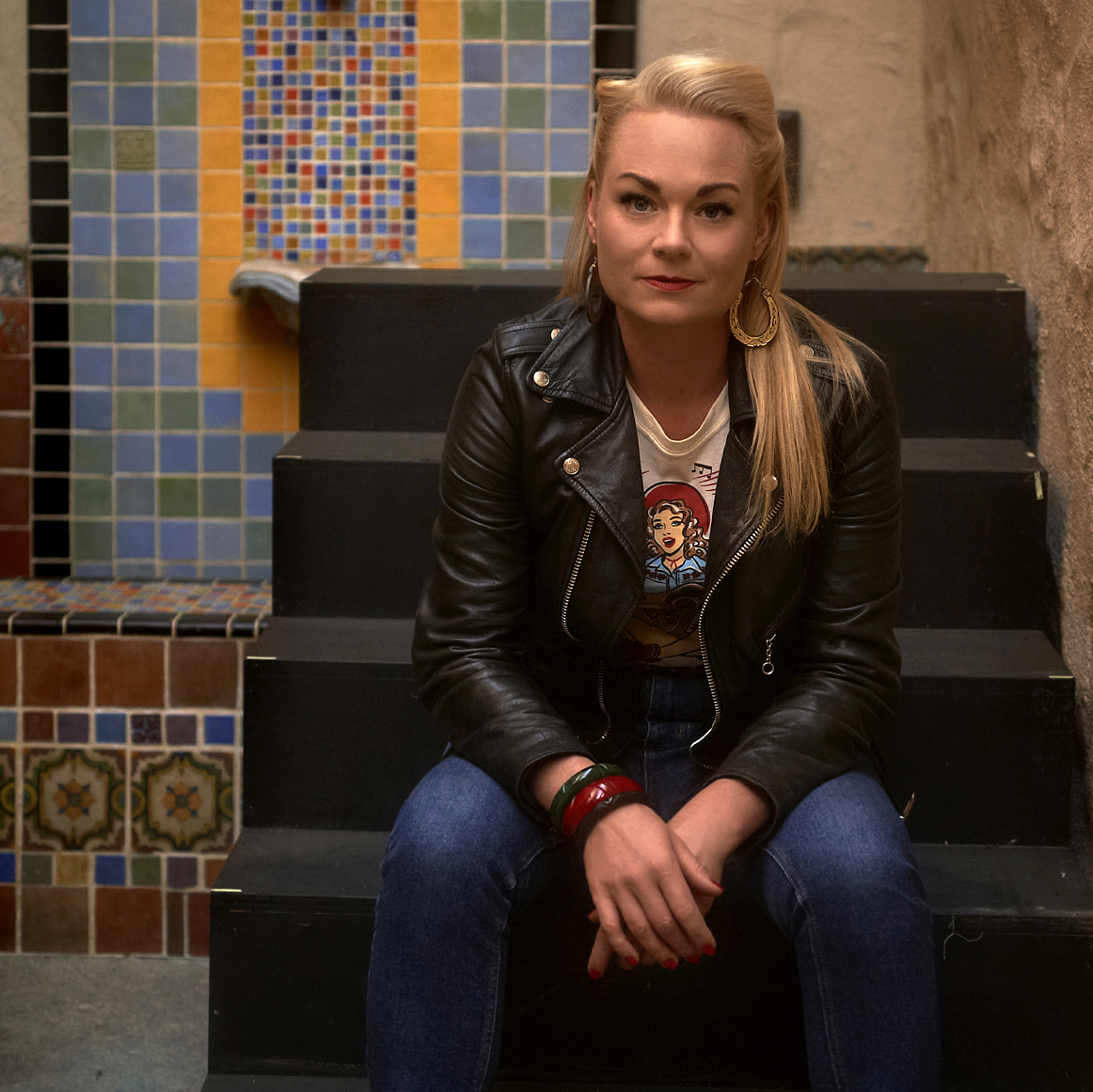