Ripe in the 60s! What do you really envision when you imagine fashion in the 60s? 1960s was the 20th century until then most motley fashion decade. The 60s started with being in the grip of the 50s, with pencil skirts and the swing dresses' 'New Look', however with a slightly simpler look. It had become more serious and adult, the pastels and the festive 50s patterns were replaced with monochrome and abstract so-called 'atomic' prints.

By the 1950s, all fashion eyes had turned to Paris. Haute Couture, and in particular Christian Dior had set the tone. In the years 1947-1957 he had created wonderfully beautiful clothes for women who did not mind suffering a bit for the elegance and sense of everyday glamor the clothes gave them. With Dior's death in 1957, and the youth uprising smoldering in the background, not just the fashion scene changed, but the fashion city. From 1963 everyone now looked towards 'Swinging' London. 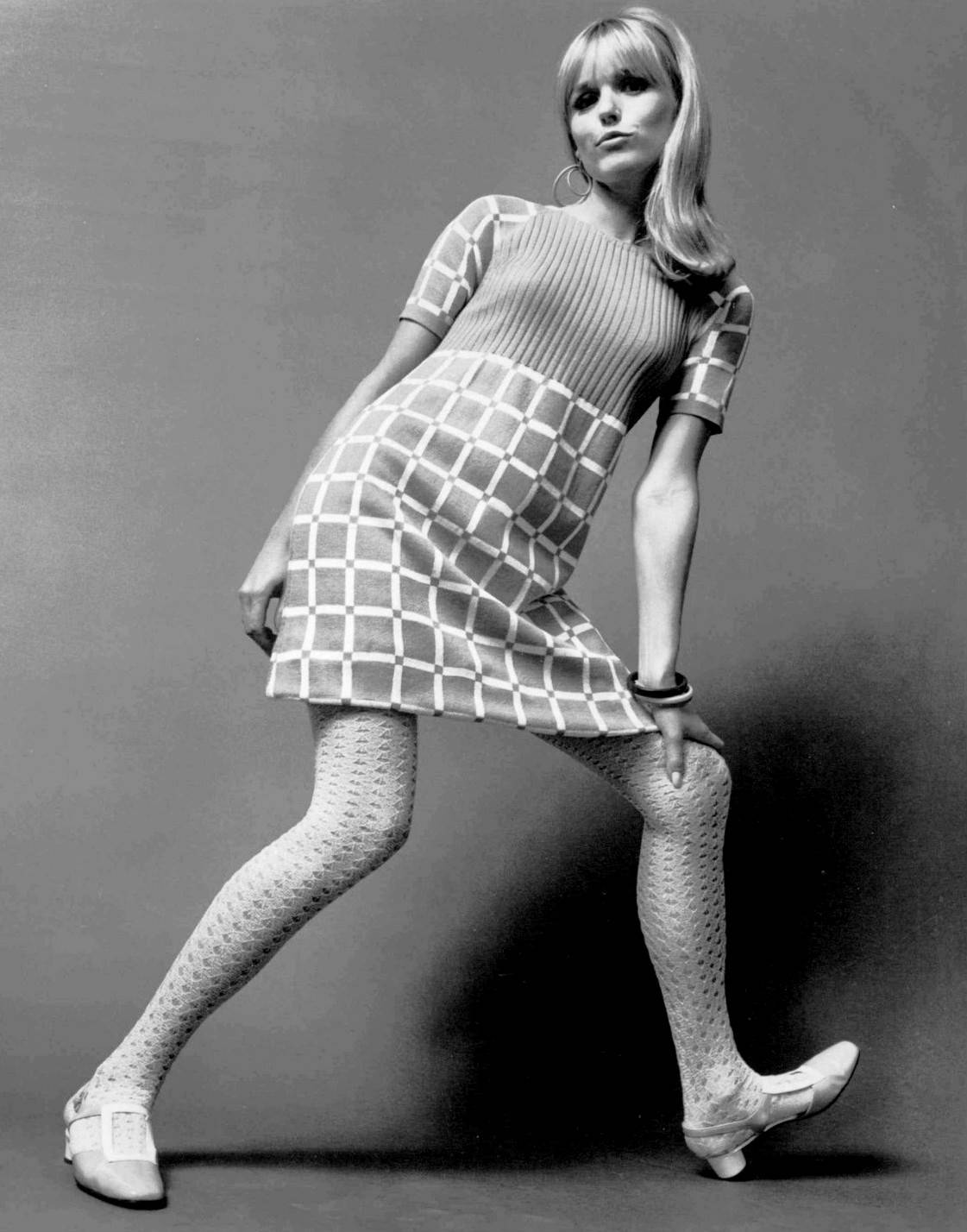 We think most of all about miniskirts when we think 1960s. But the 1960s was a decade with really many different fashion trends, something you can read more about on a previous blog post. The big difference, however, was the youth culture. The youth had been given two things: money and (for the girls) tights!

The first meant that the youth was now absolutely setting the tone for what happened on the fashion scene. The second meant the freedom to wear short dresses.

Mary Quant who is considered the creator of 'mini skirt'even said she was just inspired by the girls she saw in London's hip districts, and that was what she recreated in her designs. That too was new. The old circle from the catwalk to the mature in the street scene was turned upside down. Now it was 'street fashion' that was recorded as a trend and ended up on the catwalk with the finest designers, it had not been seen before.

The colors were strong pang colors, it was all about wanting to recreate childhood, both with short dresses and strong colors. The colors had to look like something children would draw with.

The style was dresses that were no longer than to the knee, even when they were not mini skirts, and the shape was either straight up and down or it was A-line-like. 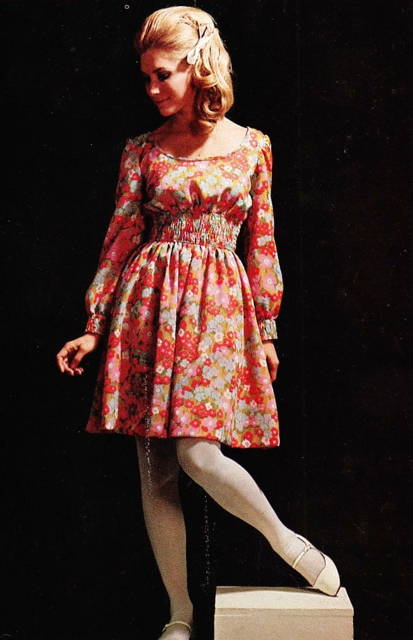 It was approx. 1964. One would not just be allowed to be young, one would be a child again and would not be forced to be grown up and boring. There was a nostalgia associated with childhood and innocence, and the look reflected this. The babydoll look became famous.

The dresses were dresses with short waists, a kind of empire cut, except that the dress itself was short. It made it look like something a child could wear. The makeup enhanced this look. Huge eyes with very large artificial eyelashes became the style.

The further we get into 1960s the more the psychedelic begins to gain ground. Patterns and colors are still strong, but more curvy in style. At the same time, the style softens a bit in step with flower power and a flair for the exotic India becomes fashion.

The shorter dresses and babydoll dresses became a regular part of the fashion image, worn by all women, not just the young, hip ones. 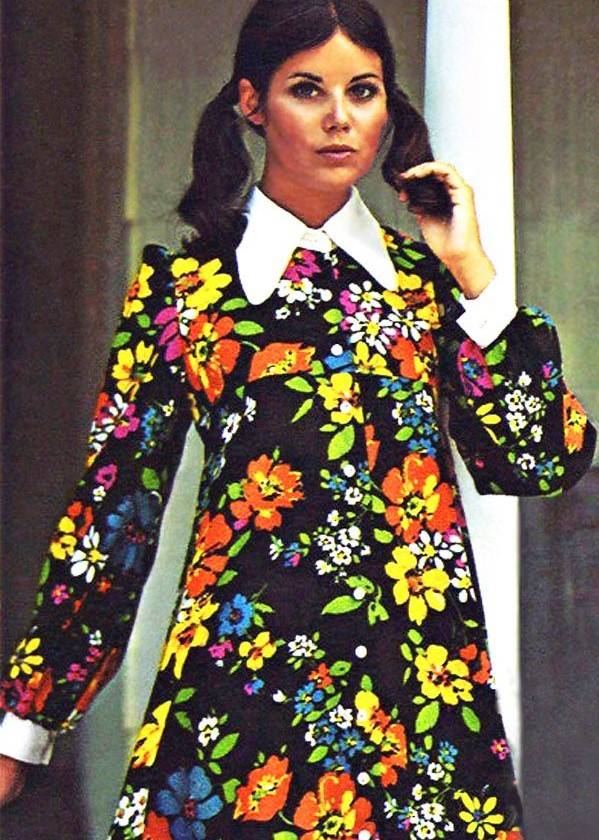 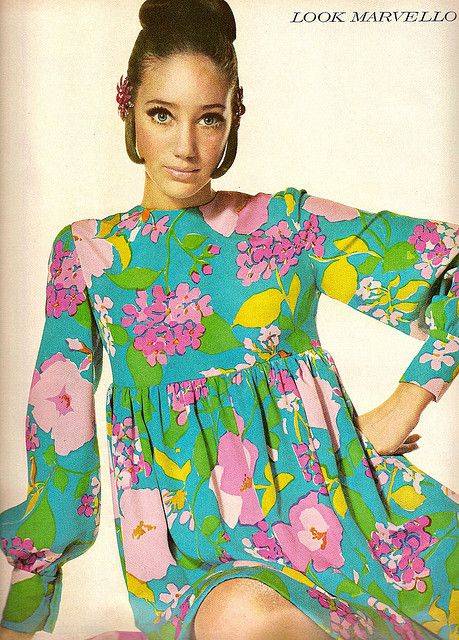 At home, we had our very own icon when it came to the brightly colored ones A-line dresses in the 60ss famous cut: Yvonne! Yvonne was the female protagonist in 13 Olsen gang films which she helped record from 1968-1981. Yvonne's dresses were designed by Lotte Dendanell in collaboration with Kirsten Walther, who played Yvonne herself. The dresses are actually more in the 1960s in style, both in expression, cut and not least length - which already in the 70s made them fun. Even if the print (Marimekko) was also large in the 70s, the cut was 60s-like, and not at all romantic enough for the free 1970s.

The dresses was typically with large patterns, flowers or solid color with lots of embellishments, like the famous daisy dress. At home, they are signs of a dress that is very 70s-like and 'a little too much', but in fact it is the accessories that make it all too much. Big hats, wigs and giant plateau heels are what we associate more with the fashion sins of the 70s. And although 60s and the worst fashion sin of the 70s was the extremely synthetic materials used for the dresses, it must be said that many of Yvonne's dresses were made of cotton, i.a. the large-patterned Marimekko fabric.

Towards the end of 1960s the style softens a bit and the dresses become longer and more fluttering again. In step with a fascination with India and hippie culture, a real chaos of fashion and styles ensues. The miniskirts and all the psychedelic patterns have become everyday fashion, perhaps with a touch of some eastern inspiration. It can be hard to see where one stops and the other starts. However, it should not be confused with the folklore and peasant romance of the 70s, it is a completely different matter. 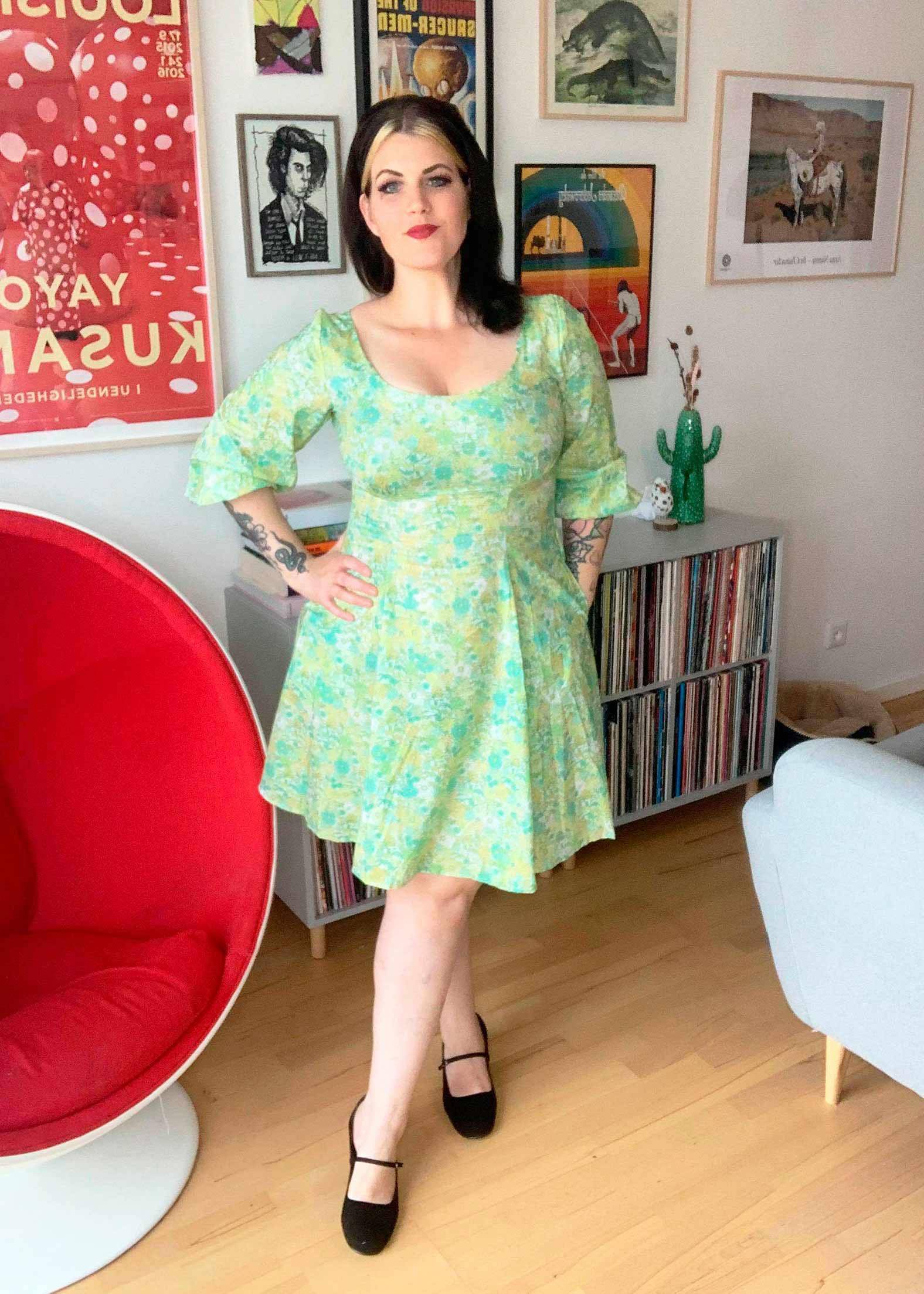 The new beautiful dresses from Heart of Haute

From Heart of Haute we just got the wonderful Jenni dresses home. They are inspired by 1960s babydoll dresses with the deep round neck, the slightly high empire cut and beautiful loose bishops sleeves, sleeves which have fullness down to the wrist and are gathered at the cuff.

However, the feminine Jenni dress has been updated so that it does not go straight into A-shape after the high waist. Our model is slightly waisted, and can be adjusted with a tie at the back right to the cut you want, so you get the best of all worlds.

The dress is made of a wonderful lightweight cotton, which makes it perfect for hot days. We have brought it home in two beautiful patterns, the sweet and summery daisy print. And in a more pastel floral print kept in douce green and yellow shades with daisies in several sizes and colors.

Also take a look at the 50s inspired Hilda dresses from Heart of Haute, which can also be styled for a beautiful 60s look.

You can choose to highlight the beautiful 60s style with e.g. Lois sandals, or other block heel sandals. Or you can wear them with 'Mary Janes' such as Freja, the new shoes from Nordic ShoePeople.

You can also mix and match the expression e.g. with your favorite shoes and a light summer cardigan.

As always, you are also more than welcome to drop by the store for more advice and guidance on how to style your new Jenni dress. 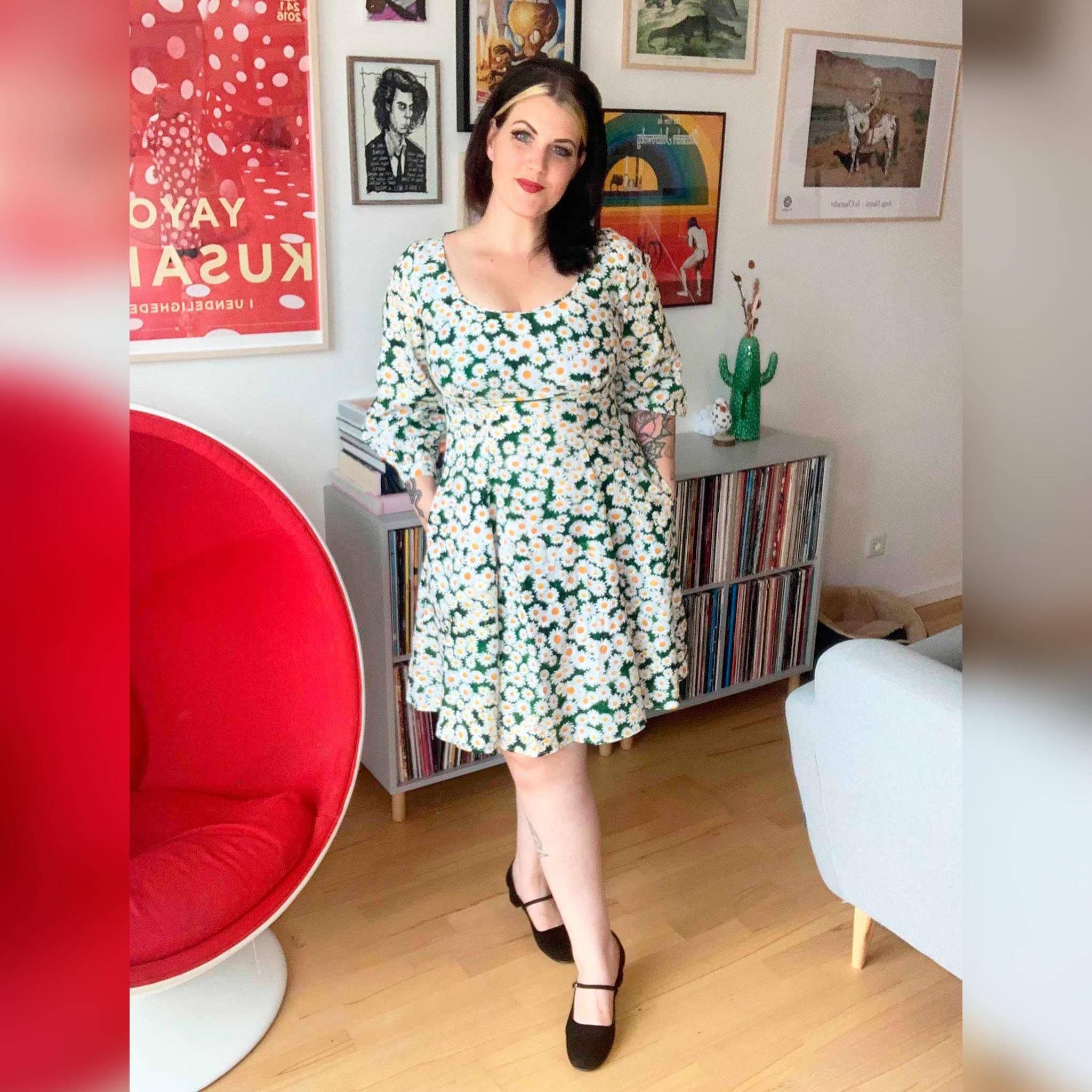 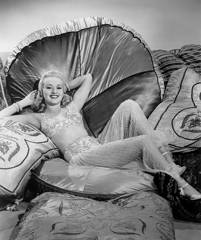 Read about the Pinup girl

The pinup girl of modern times originated around the 1890s when Charles Dana Gibson's painted his famous Gibson Girl. This was an idealized woman with slightly wildly updo hair and extreme hourglass shape

Something the modern and retro wardrobe has 100% in common is jeans! Today, it is unthinkable to walk the streets and not come across anyone wearing jeans - they have become a basic in the fashion scene. 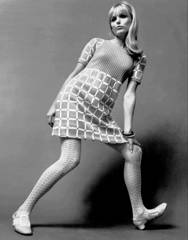 Read about fashion in the 60s

In the early 60s, fashion was still very much as it was seen in the 50s. They used the figure-hugging pencil dresses and also the wide skirts, which became shorter and shorter before going over ...