This blog post is the first of three themed blogs on fashion history from the 1940s, 1950s and 1960s. 1940s was a decade prpossessed by war, but also the life that arises after.

The development of fashion during the war

In Europe, fashion in the first half of the 1940s was heavily influenced by rationing and restrictions because many of the materials suddenly had to be used in the military services of different countries (including for the production of parachutes!), Forcing designers as well as housewives to be creative with the clothing. Furthermore, many women entered the labor market because the men were in service. where with there arose a need for practical clothing for the now active women. However, that did not mean that the designs of the 40s were less feminine. What characterizes this decade are feminine cuts with a marked waist, feminine pouf sleeves and lots of accessories.

The restrictions during the war came i.a. expressed in the fact that the length of the clothes became shorter and the shape less full - rules were simply introduced for how much fabric could be bought and used for the different types of clothing, to ensure that unnecessary resources were not used. A creative invention was the versatile shirt dress that could be used for both everyday and formal use. The shirt dress was a typical everyday dress that was used for housework and to run errands. It was a practical dress, most often with pockets, short sleeves and an a-line skirt, and then the shirt dress was most often in natural materials such as cotton or rayon in different colors and prints. 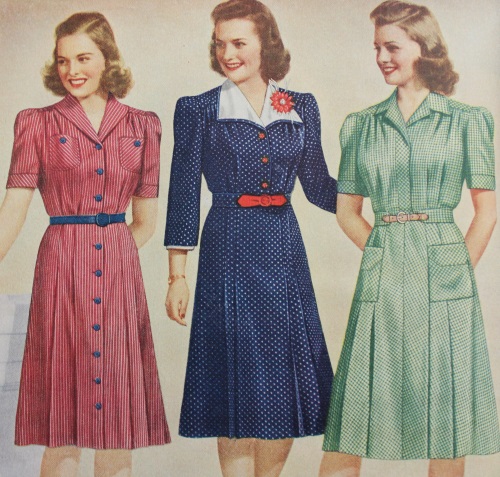 See All our shirt dresses here

Another very popular dress from 1940s which is still seen in the fashion image of our time is the slogan dress. In 1942, American fashion designer Claire McCardell created the 'pop-over' design that became the basis for several types of wrap dresses.

The Slåom dress was in every way a practical dress for the housework. Since women had been given new practical tasks and fewer means to do well with, one had to be creative when one wanted to be fashionable.

In addition, the dress was perfect: it was simple to wear, good to move in, very useful, and then it had a nice, feminine cut that highlighted the shapes. 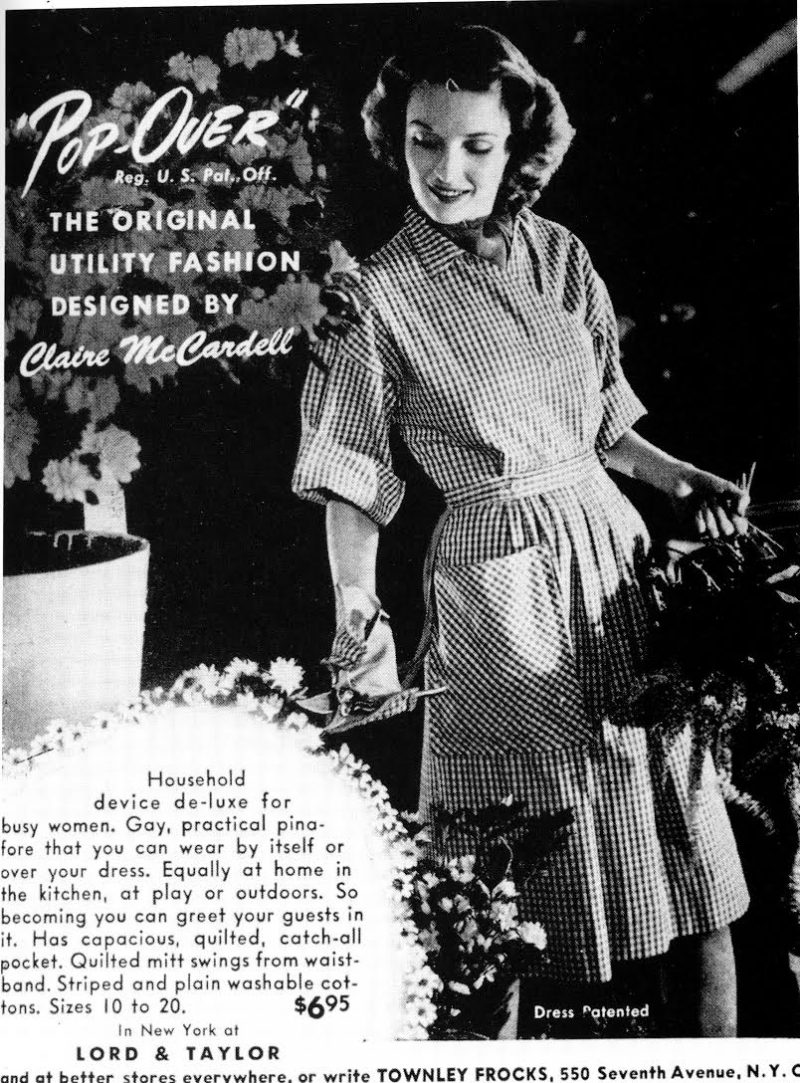 See All our wrap-around dresses here

The practical, waist-cut A-line cut and the smart details of the dresses did 1940s dresses very useful, and it was also with these models that the term ‘day-to-night’ dress emerged. A 'day-tonight'
dress was a dress that was practical and neat at the same time - practical enough to arrange the household
duties in, and neat enough to use as an evening gown for a dinner party.

The Ava Dress from The House Of Foxy is in our opinion the perfect one 1940s "Day-to-night" dress. You can easily go to work in this, and meet with friends for "Cocktail hour" after work.

See all our dresses from the 1940s here

A creative solution - the Peplum skirt

The women in wartime still wanted clothes that showed shape and figure, and therefore creative solutions were needed when this was to be created without using too much material. Out of this emerged amazing draping and sewing methods, including the peplum skirt, a pencil skirt with sewn-in fabric detail below the waist that creates a full-bodied silhouette with minimal consumption of fabric!

The typical top in the 1940s was a shirt with either a round "Peter Pan" collar, or with a more marked "pointed" collar. It had small pouf sleeves to make the shoulders wider, some even with shoulder pads.

The "pussy bow" shirt blouse which gave a more "dressy" look, became popular later in the 1940s. It gave a feminine touch to the practical, and because the tie could be tied in several different ways, it was very useful.

One thing was for sure - all shirts were put down in the high-waisted trousers or skirt, so the look became feminine with a focus on the waist. 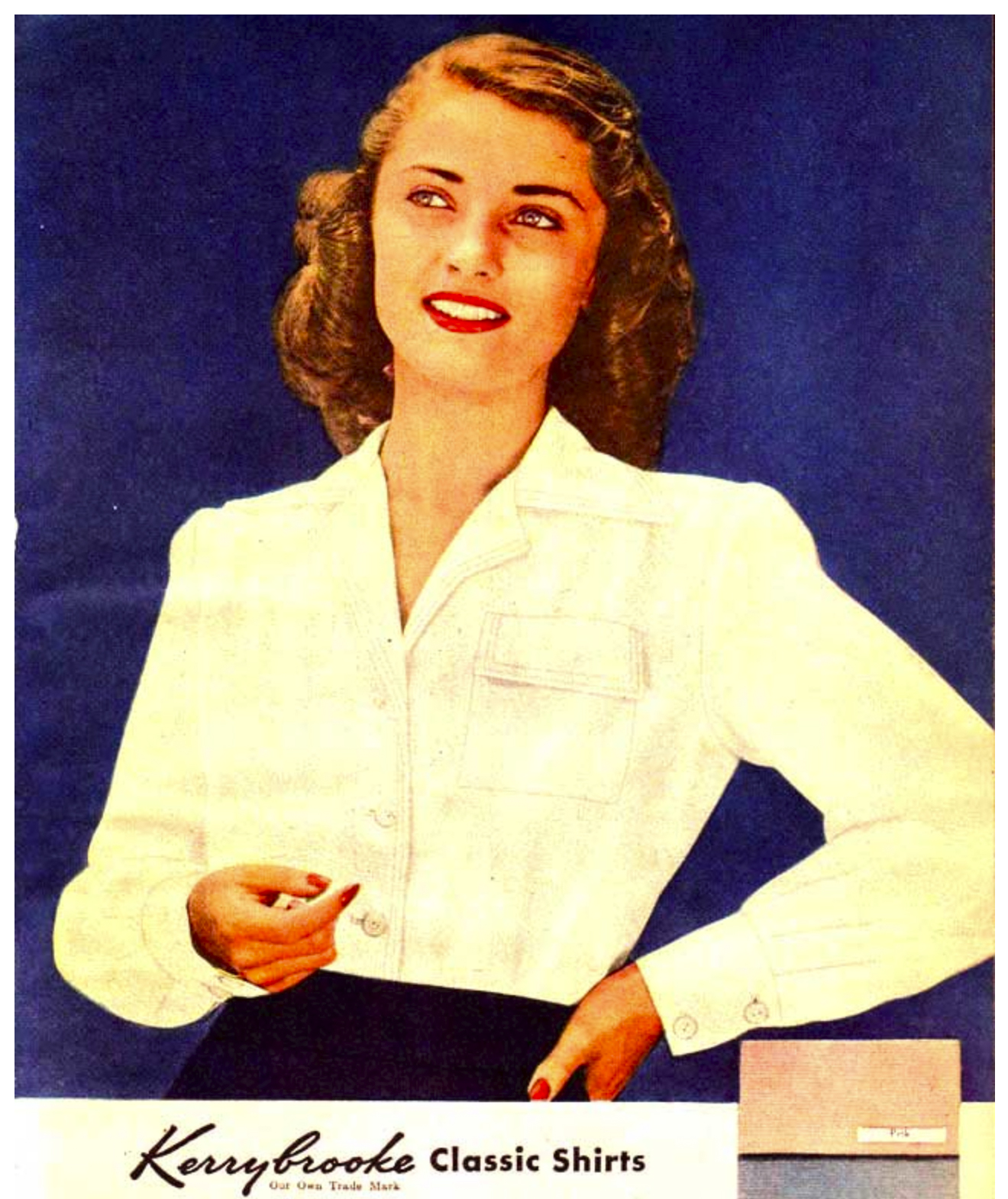 See all our shirts here

The skirt of the 1940s, like the rest of the wardrobe, was very simple due to the restrictions during the war. The skirts had to go just below the knee, and there was a ban on making pleats and other "spills" such as pockets and belt loops. The materials were most often wool or rayon.

The most popular cut was the A-line skirt, as it was practical but complied with the rules of the time. In addition, the narrow skirt with peplum or ruffle effect was seen over the abdomen and hip.

The skirt was a very essential part of any woman's wardrobe. 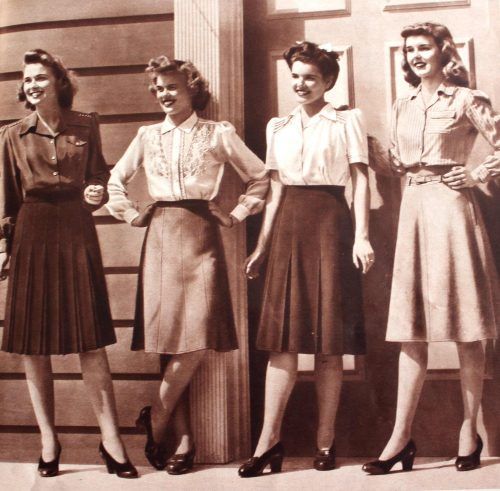 See all our skirts here

High-waisted swing trousers with a drawstring and zipper or button closure at the side are also classic early 1940s style. The first women in the industrial workplaces wore men's trousers because there was no workwear for women when the war broke out, and when workwear and trousers for women began to be designed, it was also with a slightly angular expression that was very 'straight up'. and down '. In general, 1940s fashion was characterized by simple, practical designs that could be used multiple times and in several ways. This changed, however, after the war, when again more consumption of drugs and more details were seen. 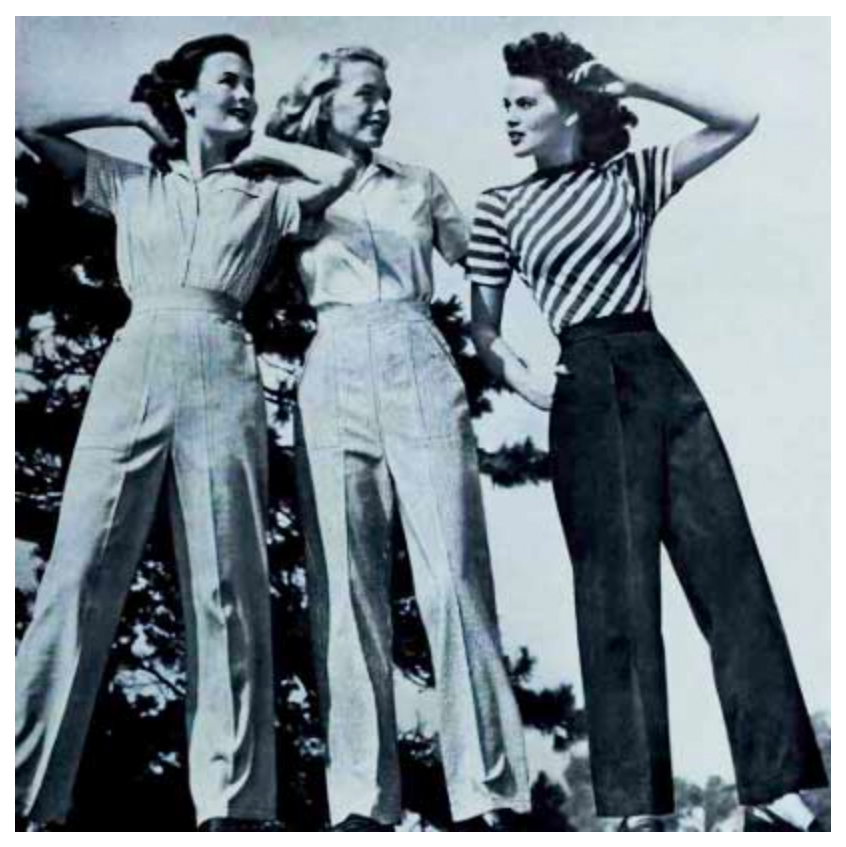 See all our pants here

The development of fashion after the war

Where the first half of the 1940s was affected by the restrictions of the war, the second half was affected by the redemption over the end of the war, the victory, and the resurgence of life.
In 1947, Christian Dior launched his two debut collections 'Corolle' and 'Huit', which took post-war Europe by storm! ('Corolle' means petals and 'huit' is the number 8 - both symbolize the classic hourglass silhouette!) Dior's designs focused on highlighting the feminine figure with all its shapes and curves - like human flowers that, after lying dormant during the war, just jumped out! 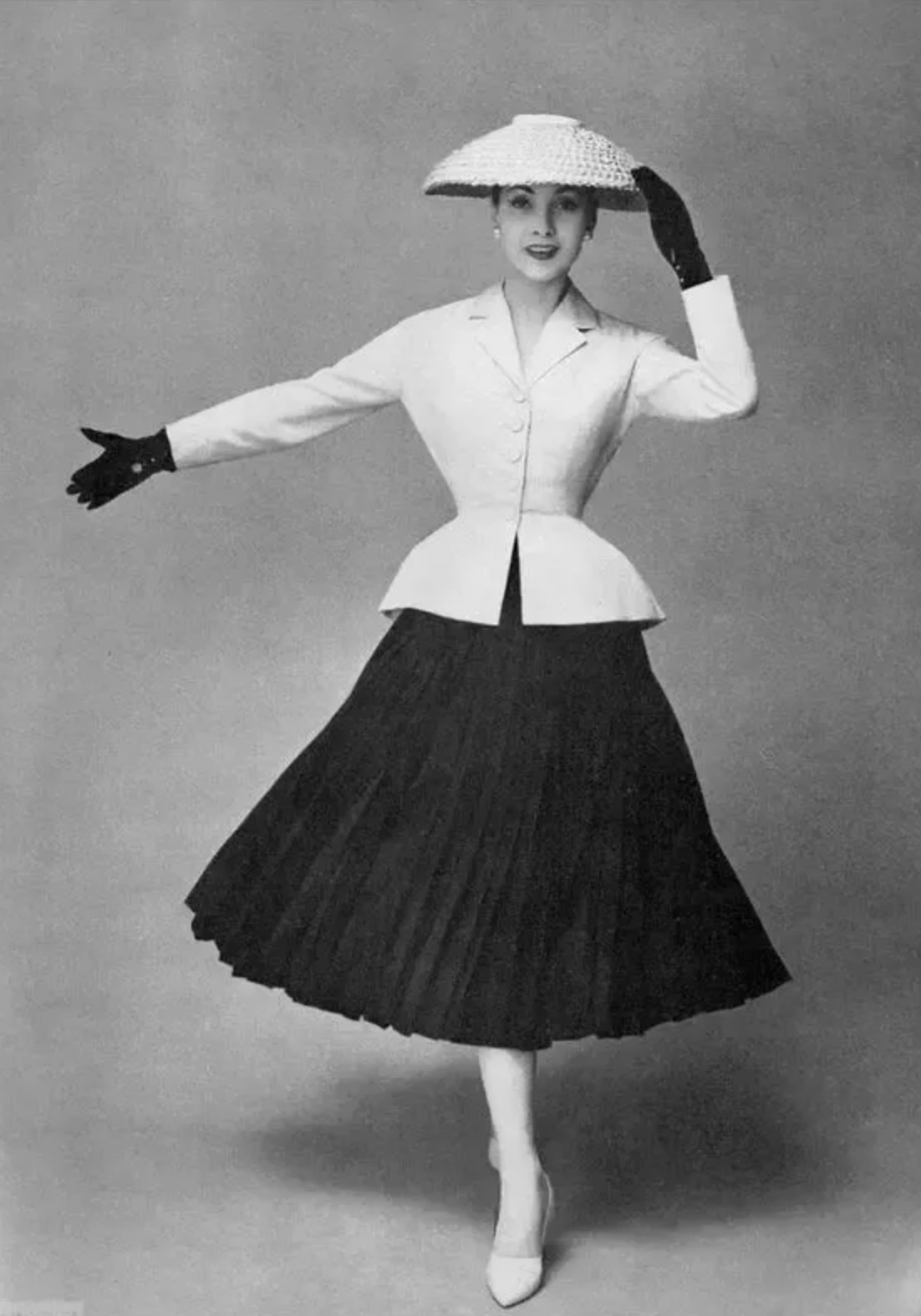 The colorful, full-bodied and vibrant designs immediately led the editor-in-chief of the well-known fashion magazine 'Harpers Bazaar' to call them "New Look", because they were so markedly different from the previous seven years' angular, minimalist and restrictive fashion image. However, not everyone was equally enthusiastic about Dior's look - i.a. Coco Chanel who was outraged at the voluminous designs and what she thought was indecent overuse of fabric, just as she was outraged that Dior wanted the women back in the corsets, which she could in no way see was beneficial to the women who were now finally been included in the labor market and public space. Despite Chanel's outrage, Dior's look became iconic, for women in post-war Europe needed to feel feminine again after wearing uniforms during the war, and that was exactly what the hourglass silhouette could do, with its full shoulders, marked waist and full hips.

I Mondo Kaos we have a solid selection of clothes inspired by the 1940s that represent and create
both silhouettes - the slim, narrow and angular silhouette and the full, round hourglass silhouette.

To create an early 1940s look we have beautiful A-line skirts, pencil skirts with and "ruffle" and classic swing pants that you can put together with fine blouses with creative draping details. We also have classic A-line dresses with puff sleeves, elegant cocktail dresses and practical, uniform-inspired shirt dresses.

To create the late 1940s "New Look" we have wonderful, waist-cut dresses with soft shoulders
in both pencil version and swing version à la Hollywood Film Noir, figure-hugging blouses and shirts, and waist-cut swing skirts with room for petticoat underneath!

Our Kirstine is very fond of the 1940s and that is why we have asked her how she thinks one
classic 1940s look looks. Kirstine put together an elegant set with blouse and skirt from ours
flagship store brand The House Of Foxy, which creates a soft, sensual hourglass silhouette. The blouse has small, sloping sleeves and a mandarin collar with keyhole closure, and the skirt is a pencil skirt with a 'waterfall effect' on the front, which - like the peplum skirt - creates shape and fullness with minimal consumption of fabric! A classic, feminine look that creates the dramatic 'wartime silhouette', inspired by Hollywood's Film Noir stars such as Ingrid Bergman and Rita Hayworth. 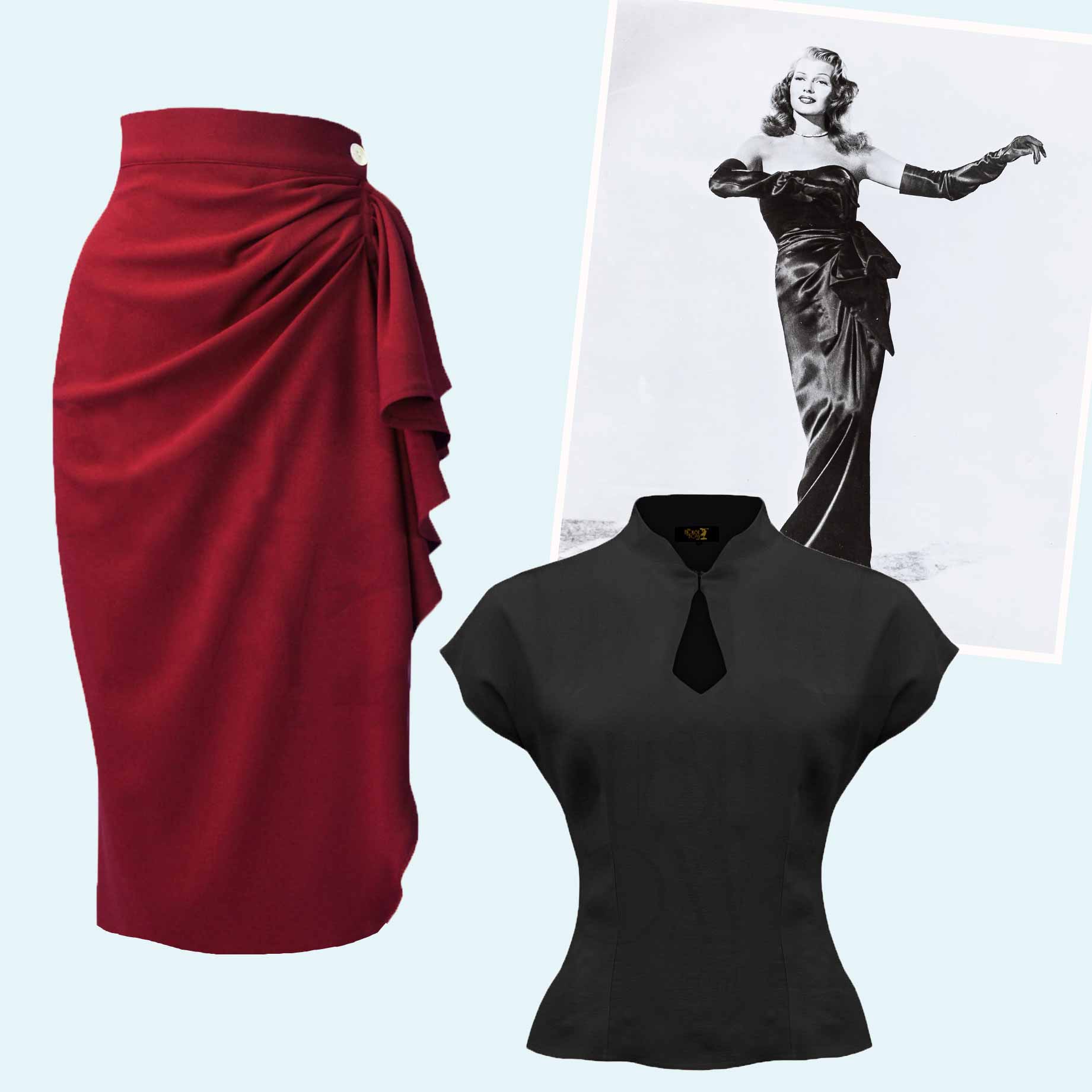 About the set, Kirstine herself says: “My favorite set in the store at the moment is House of Foxy's 40s
inspired 'keyhole' blouse paired with their 'waterfall' skirt. The blouse pulls clear
references to the Chinese cheongsam dresses that began to gain ground in the West
fashion image in the 30s and 40s. I love it in all colors and prints! The skirt is min
absolute favorite skirt! It highlights the waist and hips, and is made of a comfortable material,
which one can move in! It makes me think of Rita Hayworth as Gilda, in her
elegant, black evening dress draped at the side in the same way as the skirt! ”

In contrast to the wartime silhouette, the new look silhouette was round, curved and voluminous, highlighting the
female forms very beautiful. The dresses were detailed, waist-cut and had swing skirts, so
both the figure and the purse could be displayed, for the more fabric there was in the dress, the more it had to
have cost, and in addition petticoats were perfect for the less fortunate because petticoats created extra
fill in a skirt that was perhaps only in two layers. However, it was in the 1950s that the hourglass silhouette really took off
got stuck, which you can read more about in our upcoming blog about the 1950s!

If you feel like jumping into a classic 40s-inspired set, then you can find it here on the webshop
or you can also enter the shop on Birkegade, where Kirstine and the rest of us are ready to style you as a
real Wartime Pinup or Movie Noir Diva!